The American-Jewish diaspora has been ignoring the history and experience of a significant number of Mizrahi Jews lest it disturb their binary understanding of Jews generally - divided into simplistic categories of 'white' and 'black' Jews.  To introduce Mizrahi Jews into debate of the  Arab-Israel conflict also overturns assumptions about who is the 'privileged' oppressor and who the victim. Must-read by Nave Dromi  in JNS News.

The recent discussion about “Jews of Color,” who fit this identity and whose numbers relative to the total Jewish population are significant, has once again exposed a blind spot in American Jewry. 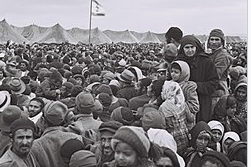 Yemenite Jews in a tent camp, 1950: overturning assumptions of who is 'privileged'

The Jews of the Middle East and North Africa, otherwise known as Mizrahi Jews, are far too frequently erased from the general debate over identity in the American Jewish community, which has recently largely been painted as binary, comprising only “white” Ashkenazi Jews and black Jews.
The debate is significant because while there appears to be a significant disagreement over the numbers of each community, Mizrahi Jews appear to be rarely counted.

Perhaps it is because the debate is largely connected to the wider American debate about identity, privilege and racism, but surely those involved in this debate, usually the elites in the media, academia and the Jewish organizational world, should not be easily forgiven for the erasure of this historic Jewish community.

More from Nave Dromi
Posted by bataween at Wednesday, July 08, 2020

Email ThisBlogThis!Share to TwitterShare to FacebookShare to Pinterest
Labels: Leftist bias against Jewish rights, Media bias, Mizrahi Jews in US

Who are these "black jews" to whom she refers? Is she referring to the Ethiopians? The tribe in South Africa? Various american convert groups (to be generous)? She doesn't really say.