Albania has unveiled a memorial to honour its Jews and its citizens who risked their lives to protect Jews during WW2. It is notable that these Albanians were Christians as well as Muslims who abided by a code of honour called Besa. Albania was only country where no Jews died.  Haaretz reports: 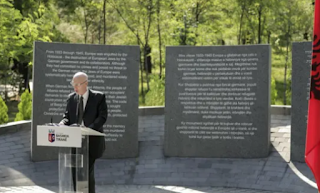 Albania unveiled a Holocaust memorial in the capital on Thursday to honor the dead and the Albanians who protected Jews from the Nazis.

The marble memorial was put at an entrance to Tirana’s Artificial Lake Park, close to Mother Teresa Square. The inscription was written in three languages — English, Hebrew and Albanian — and it said that “Albanians, Christians and Muslims endangered their lives to protect and save the Jews.”

The Nazis murdered six million people, but Albania was the only country where no Jews died or were handed over. Albanians protected their few hundred Jewish friends, and helped other Jews who fled from Germany and Austria by either smuggling them abroad or hiding them at home.

“We are the only country with more Hebrews after World War II, where the Hebrews came in search of protection and salvation,” Albanian Prime Minister Edi Rama said.


Yad Vashem has published this useful round-up of the impact of the Holocaust on Jews in North Africa (With thanks: Benjamin):

On the eve of World War II there were 400,000 Jews in French North Africa (Morocco, Algeria and Tunisia, sometimes called the “Maghreb”, meaning Arab North Africa), and another 30,000 Jews in Libya, then an Italian colony. The fate of the Jews in North Africa was different depending on the country in which they were located. In Libya, which was an Italian colony, thousands of Jews were sent to labor camps and concentration camps, and almost 600 died in these camps from hunger and disease.

In the three North African countries that fell under the regime of Vichy France, Algeria, Tunisia and Morocco, the fate of the Jews was, likewise, different depending on the country.

The Jews of Algeria, who held French citizenship, were stripped of their rights, required to wear an identifying mark, and subjected to admission quotas, even in primary schools. In Morocco, where Jews had civil rights but were not citizens of France, anti-Jewish laws were less rigorously enforced. The Jews of Algeria and Morocco were spared the fate of their brethren in Europe because the tide of the war turned against the forces of General Rommel at the battle of El Alamein; beginning in November 1942 the Allies began to liberate North Africa.

Tunisia was the only country among the three that the German army actually occupied. The army entered Tunisia together with a SS unit tasked with applying anti-Jewish policy. The Jews of Tunisia were saved only because in early May 1943, military developments forced the Germans to retreat. This article will discuss the situation of the Jews in France’s three North African colonies, whose treatment was greatly impacted by France’s defeat at the hands of Germany during World War II. An article on the Jews of Libya appears separately in this newsletter.