Why am I afraid to call myself the grandson of a survivor?

Hen Mazzig was invited to address a commemorative ceremony on the 79th anniversary of the Farhud - the Nazi-inspired pogrom of 1941 -  by the Babylonian Jewry Heritage Center in Israel. He is heart-broken that his Ashkenazi friends don't know he is as much a grandchild of  survivors of Nazi persecution as they are. Read his column in the Jewish Journal: 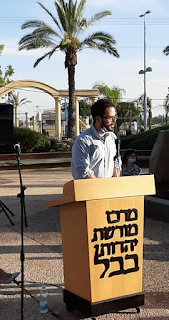 For this year’s ceremony, the group invited me to speak. When they introduced me, they referred to me as a grandchild of a survivor. Being “grandchild of a survivor” is a title many of my friends in Israel have − all of them Ashkenazi Jews whose grandparents survived the Holocaust. However, I’ve never been included in that group.

It didn’t matter that my relatives, too, had survived the Nazis. My Tunisian father’s grandparents were sent to a forced labor camp of the Vichy regime during the Holocaust. They were due to be shipped to death camps in Europe. My Iraqi grandparents also were victimized by the Third Reich; they survived the Farhud, which was incited by Nazi supporters in the regime.

But the truth is, that while I know the history of pain my Ashkenazi friends’ grandparents endured, they don’t know mine. While I know the names of the death camps and the horrific violence that happened to the Jews in Europe, my friends don’t even know what the Farhud was.

It breaks my heart. It should break every Jewish person’s heart. I am not sure if there’s an intentional agenda behind erasing the Mizrahi Jewish community’s history from international academia and public discourse.

Our exclusion does not feel deliberate on most days. But when we point out our absence from the conversation and are shamed as “divisive,” it’s hard not to see this erasure as an act of malice. As a grandson of a survivor, I have a responsibility to keep trying to get the world to bear witness, just as I have to the many Ashkenazi Jews who were slaughtered in the Holocaust.