On World Refugee Day, recalling the airlift from Iraq

In honour of World Refugee Day (20 June), Point of No Return  recalls the 850,00 refugees  forced to flee Arab countries. It is 70 years since the first flights  carrying 175 Jews took off from Baghdad, Iraq, for Israel via Cyprus (The Iraqis needed an alibi they could present to other Arab countries). Sone 120,000 Jews would be airlifted from Iraq over the next year, most leaving their property behind. Here is an extract of Generations of Fighters, 1897 - 1967 by Aviezer Golan. 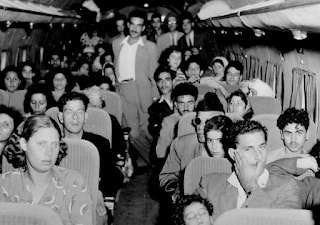 Iraqi Jews being transported on 'Operation Ezra and Nehemiah'

'Operation Ezra And Nehemiah' began on Friday, May nineteenth, 1950. Two Constellations landed at the airport. Their upholstered seats had been replaced  with wooden benches, and about 120 Jews were crowded into each plane. They were confused and humiliated, because on arrival at the airport they had been surrounded by police, who conducted a painstaking search of all their luggage. Some of the passengers were even ordered to undress, to be sure that they were not concealing on their bodies money or jewellery above the permitted amount. When the engines  were roaring, they did not know whether  to feel sorrow at leaving the land of their birth, or to rejoice at ridding themselves of its troubles; and they wondered what awaited them at the end of their journey.

In the airport terminal, behind a barrier, waited a group of relatives who had come to say their goodbyes to those leaving.Among them were two activities from the Aliyah committee, Yitzhak Sofer and Yehezkel Ezra. They watched the embarrassing and coarse searches the police conducted of those leaving and were worried. Did this complete the mistreatment by the authorities or was it just the beginning? Would the planes be allowed to take off?

The signal was given by the control tower. The first plane accelerated down the runway, its wheels left the ground, it circled once, then it turned to the west.

(...) Operation Ezra and Nehemiah was continuing at full intensity, and the report spread among the Jews that those leaving were really going to Israel, and that the registration was not a trap by the hostile government. The registration for aliyah expanded beyond all expectations and predictions. The 30,000 mentioned by the government representatives in the negotiations with Mr Armstrong
( Israeli emissary Shlomo Hillel -ed) had already departed, but the number of those registered for aliyah had been swollen by a further 30,000. Now non-Zionists and those who initially had had no intention of emigrating to Israel also began to register. Seeing their neighbours' houses and all the Jewish streets emptying o their inhabitnts, they had no wish to be left behind.

A very interesting historical fact that we must not forget. Thanks for your work!

My Dad escaped by foot and then in the trunk of a car to Iran. My mom was airlifted in an airplane with very few passenger seats.

Hey, An investment account is held at such financial facilities as banks, brokerage houses or even insurance companies. The main purpose of this account is preservation and capital growth as well as fixed income gains through long term deposits in the asset portfolio.
http://www.confiduss.com/en/banks/account/investment/

Please don't send emails to my work account. Unsubscribe. You unsubscibe take me here. What the hell.