High-profile obituary by Sam Roberts in the New York Times of Albert Memmi, the Tunis-born writer and philosopher who died in May 2020 aged 99. But this tribute is marred by the expression 'Jewish Arab' in the title, a description which Memmi never used.

“I am a Tunisian, but of French culture,” he wrote in “The Pillar of Salt.” “I am Tunisian, but Jewish, which means that I am politically and socially an outcast. I speak the language of the country with a particular accent and emotionally I have nothing in common with Muslims. I am a Jew who has broken with the Jewish religion and the ghetto, is ignorant of Jewish culture and detests the middle class.

“I am poor,” he went on, “but desperately anxious not to be poor, and at the same time, I refuse to take the necessary steps to avoid poverty, a native in a colonial country, a Jew in an anti‐Semitic universe, an African in a world dominated by Europe.” 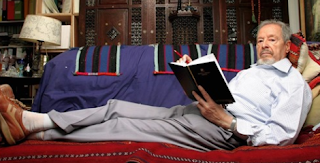 Reviewing “The Scorpion” for The New York Times, Richard Locke described Mr. Memmi’s earlier novels as memoirs “recorded with a cleareyed sensitivity, a modest candor and remarkable strength.” He compared Mr. Memmi to “a Tunisian Balzac graced with Hemingway’s radical simplicity and sadness.” “But ultimately,” Mr. Locke wrote, “it is Memmi’s heart, not his skill, that moves you: the sights and sounds of Tunis, the childhood memories, the brothers’ sympathetic and contrasting voices, their all-too-human feelings, have a resonance that reawakens for a while the ghost of European humanism.”

Albert Memmi was born in Tunis on Dec. 15, 1920, one of 13 children of Fraj Memmi, a Tunisian-Italian Jewish saddle maker, and Maira Sarfati, who was of Jewish and Berber heritage. After starting Hebrew school when he was 4, he graduated from the prestigious Lycée Carnot de Tunis in 1939. When France’s collaborationist Vichy regime imposed anti-Semitic laws during World War II, he was expelled from the University of Algiers, where he was studying philosophy, and sent to a labor camp in eastern Tunisia.

When the war ended, Mr. Memmi resumed his studies at the Sorbonne in Paris and married Marie-Germaine Dubach, a French Catholic. They had three children. The family returned to Tunis in 1951, and he taught high school there, but they left after independence was proclaimed in 1956. There was no immediate word on his survivors.

Mr. Memmi became a professor at the Sorbonne and received a doctorate there in 1970. In 1975 he was named a director of the School of Higher Studies in Social Sciences. Among his other books were the two-part “Portrait of a Jew” (published in 1962 and 1966) and “Dominated Man” (1968). On Middle East policy, he described himself as a left-wing Zionist, favoring a separate Palestinian homeland while viewing Zionism as a form of anti-colonialism, because, he said, the Jew “has to fight for his national liberation and create a nation for himself.”

In The Jewish Review of Books, Daniel Gordon wrote in 2018 that Mr. Memmi “has combined, perhaps more than any other writer since World War II, the compassion needed to articulate the suffering of oppressed groups with the forthrightness needed to censure them for their own acts of oppression.” Mr. Memmi said of his writings: “All of my work has been in sum an inventory of my attachments; all of my work has been, it should be understood, a constant revolt against my attachments.” “I was a sort of half-breed of colonization,” he once said, “understanding everyone because I belonged completely to no one.”