This interesting Tablet  piece by Raad Yahya Qasim, an academic based in Brazil, profiles his father Yahya, editor of the newspaper Al Sha'b until 1958. Yahya typified a breed of liberal Iraqi who worked with, and was sympathetic to, the increasingly oppressed Jews of Iraq. However, it is not clear how his work as a lawyer helped mitigate the 1951 Denationalisation Law, which froze the property of Jews departing Iraq, and remains on the statute book to this day. (With thanks to all those who flagged up this article). 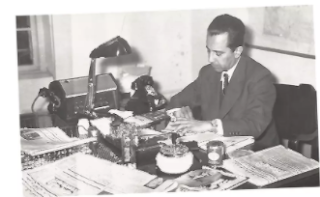 Yahya Qassim at the editor's desk of Al Sha'b


Returning to the core of my story—Al-Sha’b (the people in Arabic) was launched in 1945 by Yahya Qassim with the aim of using the editorials he penned to advocate daily and emphatically for a pluralist, democratic Iraq, where citizens—whether Muslim, Christian, Jewish, or of any other set of personal faiths and beliefs—are considered fully equal under the rule of law. In less than a year, Al-Sha’b rose to become the leading newspaper in Iraq in terms of its circulation, its liberal editorial policy, and its independence from any political party or group. True to Qassim’s pluralist principles, there were several Jewish professionals working at Al-Sha’b alongside Muslims and Christians, both as journalists and in administrative positions.

In 1946, with Al-Sha’b in its second year of publication, the political atmosphere in Iraq started to grow increasingly tense in view of the expected creation of the State of Israel. Iraqi public opinion was roughly divided into three views on this matter: The first view was that of Iraqi political parties and newspapers pushing the Arab nationalist approach of considering Iraqi Jewry and Zionism as one and the same and exhibiting outright hostility toward the Jewish community in Iraq. The second view, predominant in the ruling establishment, looked at the question through a somewhat more moderate and pragmatic lens, taking into account the pressure exerted by some other Arab governments, particularly Syria’s, to follow a hard-line policy toward Zionism and the creation of the State of Israel.

The third view was that of a minority, in which Yahya Qassim was a leading example. This view was embodied in Qassim’s daily editorials in Al-Sha’b, arguing that Iraqi Jews were—both de jure and de facto—fully equal to other Iraqi citizens, and that the creation of the State of Israel was a separate and distinct question of Iraqi governmental foreign policy. Furthermore, Qassim argued that sympathizing with the plight of the Palestinian Arabs in no way conflicted with the recognition of the full rights of Jews as Iraqi citizens.

The author pays tribute to New Babylonians by Orit Bashkin, which mentions his father Yahya Qasim on page 215:

"Al-Sha'b, a paper edited by Yahya Qasim, critiqued Zionism, yet made the distinction between Zionism and Judaism. Qasim was close to Hesqel Shemtov, acted as the lawyer of the community, and negotiated many of the deals regarding the Denationalisation Law. Menashe Somekh came to work for Al Sha'b and quickly became one of Al-Sha'b's leading workers. .. In a story about a discussion in the British House of Lords concerning the sufferings of the Palestinian refugees, Al Sha'b published an article about a prominent Jewish author who sought to alleviate their misery...The article suggested that a Jew, despite his religion, could sympathise with the plight of the Palestinians since ethics and compassion, and not religion, were what determined how one responded to the refugee problem.....Unlike the right, which urged jews to leave Iraq as soon as possible,  Al Sha'b implied that leaving for Israel would not solve their problems."
Posted by bataween at Monday, June 29, 2020