Abducted Lebanese Jewish leader was a poet and translator

Before he was murdered in 1971, Albert Elia, a Lebanese Jewish leader, had translated a well-known, deeply personal Piyyut (Jewish liturgical poem) sung on Yom Kippur. The translation of Lekha Eli Teshukati in  rhyming verse, testifies to the fact that the translator was a poet in his own right. Charles Khodri writes: 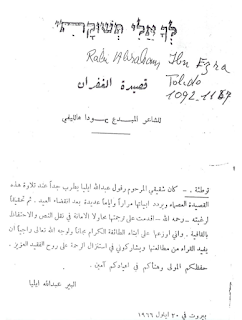 On the first page of his translation, Elia wrote a dedication to his late brother, Raffoul Ben Abdalla Elia.


The piyyut opens the Yom Kippur prayers in Sephardi communities. Although some scholars through the ages have claimed that this text may have been written by Rabbi Yehuda Ha Levi, most agree that it was crafted by the pen of Rabbi Ibn Ezra. 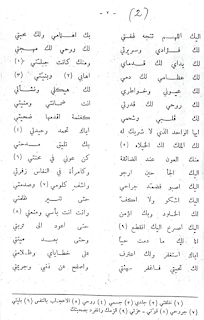 The Arabic version of the piyyut translated by Albert Elia

On the first page Albert Elia indicates that it was originally written by Yehuda Ha Levi. Someone added by hand that it was written by Rabbi Avraham ibn Ezra.

Albert Elia writes that he dedicates this translation to his late brother Raffoul Ben Abdallah Elia who was very fond of this piyyut as he continued to sing it even after the holidays. . Albert Elia   also says that he  translated it so that the Beirut community could enjoy reading it and understanding it.


A modern interpretation of the piyyut by Israeli performer Ishai Ribo

Albert Elia was the executive secretary of the Jewish community in Beirut. He was responsible for the welfare of all Lebanese Jews. He took on the project of helping Syrian Jewish refugee to acquire official papers allowing them to leave Lebanon. He was successful thanks to his diplomatic skills and friendly relations with the Lebanese authorities.
He was first arrested in 1961, then released one year later. But  this did not diminish his courage and perseverance in helping the Jews  who were escaping Syria, leaving behind properties and family and stripped from their nationality.
In September 1971 he was abducted at 8.am by Syrian secret agents operating in Lebanon. He was on his way to his office, on the ground floor of the synagogue.
The Jewish community council tried all means to get him released,  even asking foreign governments for help. They failed to save him from his Syrian abductors.
He was never heard of again. It is assumed  that he was tortured and died at the hands of his tormentors. He was 68 years old.
He was a martyr for the cause  of saving Syrian  Jews and helping them to emigrate out of the Middle East.