The massive contribution of Jewish craftsmen to art and handicrafts in the Arab world must not be forgotten.  Maurice Nseiri is a Syrian Jewish craftsman born in Damascus, 1945. He studied metalwork with his father, and owned a popular shop called “Omayad Bazar”.The Omayad Bazar is now permanently closed but Maurice‘s designs can still be found all around Damascus : in synagogues, at the Sheraton hotel, at the Sham Palace and many other places. Admired by arts enthusiasts his most famous creation is the front brass gates of the Syrian Presidential Palace. Here is an extract from a Hadassah magazine profile published  in 2016. 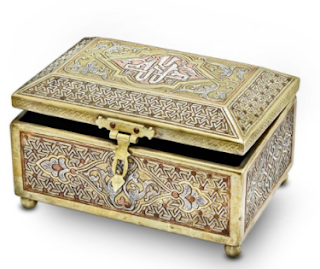 When artist Maurice Nseiri fled his native Syria in 1992, part of the mass exodus of most of the country’s remaining Jewish community, he took with him whatever he could of his handcrafted metalwork. That meant that only several dozen of his smaller creations—samovars, ornamental boxes and platters, fanciful birds, vases and bowls—eventually came with him out of the thousands of pieces created in his workshop.

The Damascus-born metal artist, 72, may be the last Jewish practitioner of a centuries-old artistic heritage. Handed down father to son in the 2,500-year-old Syrian Jewish community, the art of inlaying metals into one another—known as damascene—to create ornamental objects was taught to Nseiri by his father, Tzion Nseiri. Maurice Nseiri is considered a master.

For over 30 years, Nseiri’s workshop, called the Omayad Bazaar and located in the Jewish Quarter of the Old City in Damascus, produced furniture and ceremonial keepsakes for prominent individuals and landmarks in Syria. Nseiri’s pieces have adorned mosques and synagogues, royal palaces and celebrity homes in Saudi Arabia, Qatar and Kuwait. He designed the gates, floor and platform for the Al-Franj Synagogue in the Old City, and the grand gates of the Syrian Presidential Palace, also in Damascus.

Thank you. I love damascene art, the art of inlaying metals into one another to ultimately complete with decorative art works . But I have never seen architectural works. Assuming Nseiri's gates, floor and platform in Al-Franj Synagogue in the Old City are still intact, I would love to visit.