Nebi Daniel, a group of Egyptian Jews living in France, the UK, Switzerland, Australia and the USA, has had its offer to  buy a number of Torah scrolls still in Egypt rejected.
The Egyptian government has forbidden Torah scrolls more than 100 years old to leave the country as they are classified as antiquities. But just under half of the Torah scrolls in Cairo out of the total identified by Nebi Daniel are less than 100 years old, and are worth repairing for further use. There are 140 Torah scrolls in the whole of Egypt.
The offer to buy the scrolls was made to  the Drop of Milk, a NGO resurrected in 2016. The Drop of Milk was  originally  set up to care for poor and orphaned Jewish children. Its articles of association were modified to include safegarding Egypt's Jewish heritage. 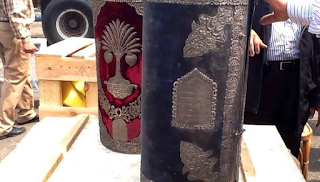 The Drop of Milk has long complained of lack of funds to preserve the Bassatine cemetery in Cairo,  although the restoration of the three cemeteries in Alexandria was largely funded by Jews outside the country.
The sale of the scrolls would be  a 'win-win situation', says Yves Fedida of the Nebi Daniel association.
But the offer seems to have been rejected after the Drop of Milk consulted with Magda Haroun, head of the tiny Cairo Jewish community of less than five people.
Nebi Daniel has also suggested that the community raise funds by selling two schools -  one in Abbaseya and another in the centre of Cairo - and a building in the Cairo suburb of Maadi. The suggestion seems to have fallen on deaf ears.
For 17 years Nebi Daniel has been campaigning without success for a copy of  the Jewish community's registers of births, marriages and deaths. The registers were handed over to the government by Magda Haroun in 2016 and are now housed in the national archives.

A Zoom meeting on 10 June 2020 about the February trip made by 180 Jews for the re-dedication of the Nebi Daniel synagogue in Alexandria featured (1 hour in) a discussion on the future of Egypt's Jewish heritage.
Posted by bataween at Friday, June 12, 2020