'Blacks' were also oppressors of Africans and Jews

Black Lives Matter protests in the West have called for symbols of white colonialism and the Trans-Atlantic slave to be torn down. Ex-pupils from a Jewish school in London have petitioned for a 'decolonisation ' of the curriculum. Lyn Julius in Jewish News warns that we should not fall for simplistic categories of 'white' bad, 'black' good: 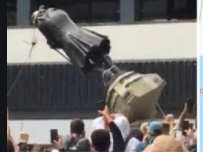 Black people are generally being seen as victims of white people. Third World people are seen as victims of white colonials. Where do Jews fit in? There is a dangerous trend afoot to shoehorn Jews in to the white colonial category. Added to the classic antisemitic trope of Jewish power and world domination, Jews then become portrayed as oppressors of black or coloured people. It is a short step to extending the analogy to Israel: a ‘white’ colonial state oppressing ‘black’ Palestinians.

This tendency is worrying for two reasons. One is that Jews in Europe were also victims of oppression – until recently Jews suffered from systemic bans and quotas. The other reason is that recent waves of Jewish refugees into Britain from the Arab and Muslim world testify to the oppression of (coloured or ) black people by other black people.

It is a fact that Jews were only one notch above slaves in a systemic Muslim structure of racism branding non-Muslims as dhimmis. Ironically it was western colonialism which ‘liberated’ these Jews from their subjugated status.

The late Albert Memmi got it right. He was a Tunisian Jewish writer and philosopher who supported the anti-colonial movement for independence agains the French. But surveying the dismal failure of postcolonial states to respect the rights of minorities, and witnessing the flight of his fellow Jews from Arab countries, Memmi also acknowledged that ‘black’ people could be oppressors. As a result he was a fervent supporter of Zionism as the national liberation movement of the Jewish people.


In this 2016 Times of Israel article, Micha Danzig points out the 'real intersectionality' - European and Arab oppression of Jews and Africans:

European colonization and oppression of Jews began with the Greeks, who tried to “Hellenize” those “stiff necked” Jews who had the temerity to reject the idea of becoming second-class Hellenists and wished to stick with their supposedly primitive, native ways. It was followed by the Romans, with their colonization of Judea; and ultimately by the Roman massacres and expulsions of millions of Jews from their native land, many of whom were taken to Europe in chains as slaves. What followed, of course, was nearly 2,000 years of institutional racism (including religious apartheid laws), oppression and massacres of Jews in Europe. 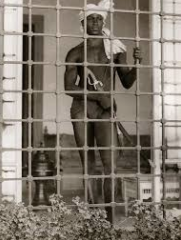 A eunuch guarding a harem in Tunisia

Arab colonization and oppression of Jews began a little later. In 641 C.E., the Caliph Umar decreed that Jews should be removed from all but the southern and eastern fringes of Arabia.[v] Can anyone say “ethnic cleansing”? As for the Levant, the Arab conquest and colonization began in earnest in 634 C.E. with Jerusalem falling to the Arabs and Caliph Umar in 637 C.E. What followed for Jews under Arab (and Ottoman) colonization, including in the Jews’ indigenous homeland and holiest city, was 1400 years of institutional racism (with numerous religious apartheid laws, just like in Europe), such as the first decree in 850 C.E. that Jews had to wear a yellow badge identifying them as “inferior,” which led to the systematic oppression and massacres of Jews (for more on the oppression and massacres of Jews in Arab conquered lands – see, https://blogs.timesofisrael.com/its-not-us-its-them/)

Arab Colonization and Oppression of Africa and Africans : While it is acceptable and popular to bash the European nations for all of their oppressive and brutal conduct as racist, colonialists (which the Europeans certainly deserve); for some reason Arab colonialism, racism and oppression of non-Arabs largely gets a pass.

More about the Arab/Muslim slave trade
Posted by bataween at Saturday, June 13, 2020

These sinister arguments that you have discussed have often been developed or elaborated or worked out by psychological warfare experts, such as worked with Christopher Mayhew, a one time official of the Foreign Office, also a BBC employee and a pro-Arab activist in the UK. Among other things, Mayhew organized a pro-Arab body of UK Labor members of parliament, called, as I recall, Labor Friends of the Arab World, or some such name.

The notion of a palestinian people that never existed in history seems to have come out of Mayhew's circles. Further, this gambit of enlisting support for the Arabs among non-white people, especially Blacks and their sympathizers, began in the 1960s. In the early 60s, some wrote that it was a shame that the Jews had set up their homeland in a country of "non-white people." Think of the insinuations of this line. By implication, it says that Jews are white whereas Arabs are "non-white." It also insinuates other unfavorable accusations against Jews and prepares the way for today's false accusations of apartheid, colonization, etc.
This subject really needs to be explored thoroughly but I do not have the time now. I will just add that before WW2, Jews in Britain and Germany, etc, were considered Oriental. Around 1800, Jews in Europe were described as Asiatic, Oriental, and even as "palestinians" [by the German philosopher Kant: "the palestinians who live among us" was how he referred to German Jews]. So even respected European intellectuals like Kant, Hegel and Voltaire and their associates considered the Jews living in Europe as Orientals and therefore alien to Europe. Now Jews are described as quintessential Westerners who are alien to the Middle East, the Orient. The Jews are still depicted as alien as around 1800.

It is obvious that anti-Israel and anti-Jewish themes and notions such as employed by the so-called "Black Lives Matter" movement and its "intersectional" partners was invented and elaborated by psychological warfare and cognitive warfare experts and institutions.
To be sure, I agree with the slogan: Black lives matter.
But it is sinister to make this justified slogan into a smokescreen for making Jews into aliens who have no right to live.