Adventures of a Cairo-born Jew 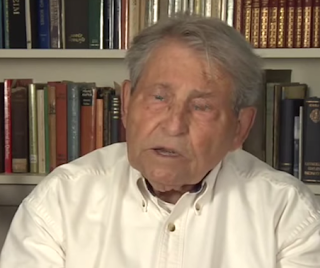 
Moshe Sadeh died in 2018, aged 90, and this 2014 video interview with him is a testament to a life well lived. Born in Cairo to Jews from Turkey (the original name was Saadi) connected to the Alliance Israeli Schools, Sadeh made aliya aged 17 in 1946. A member of the Hehalutz Zionist youth group in Egypt (where Zionist groups operated until 1948) he fought in the Palmach and IDF. He  maintained a lifelong enthusiasm for Israel in spite of his moving to Montreal in 1964.

Among the fascinating anecdotes,  Moshe describes the wartime antisemitism in Egypt, tells  how he was smuggled into Israel in a stolen truck disguised as a British soldier. He met an Arabic-speaking Jew who had deserted from the Egyptian army. The Jew was so poor that he could not afford the 21 dinars to  pay for an exemption, as most middle class Jews (assimilated into French culture)  did. There were many poor Jews in Egypt.

As he was assumed to speak Arabic, Moshe was assigned to Israel's Arab intelligence section in 1948 - but as he could not pass for an Arab, his stay was short-lived.

In another story, he tells how Jews in Egypt with no connection to Italy rushed to obtain Italian passports after Mussolini, annnouncing that the Livorno archives had burnt down, wanted to increase his influence in Egypt. During a visit by Mussolini's defence minister Badoglio, unemployed Jews stood as a honour guard. They were drafted into the Italian army and sent to invade Ethiopia. One individual refused to serve. The deserter was later feted as a heroic anti-Fascist.

But most poignant of all was Moshe's encounter with a 15-year old named Asher. Asher  had been a sonderkommando in a concentration camp and had somehow ended up in Palestine. Nobody believed Asher's stories of Jews dying in Nazi crematoria, and called him a nutcase. After the war, Moshe searched high and low for Asher in order to apologise for having doubted him. But he never found Asher.