In January 1950, the Alliance Israélite Universelle in Beirut was bombed. Two died when the roof collapsed - the headmistress Esther Penso and a member of the house staff.

At first it was announced that the school had collapsed as a result of a violent storm. A military expert quoted in L'Orient confirmed that the cause of the damage was the bombing. In Paris  AIU officials did not make great play of the incident. Two of the Beirut school governors, Rene L Farhi and Ezra E Farhi wrote a confidential note to AIU chairman Rene Cassin, confirming that the bombing was a Palestinian terrorist attack. They criticised the community council for wishing to suppress the incident.

There were emotional scenes at Mme Penso's funeral, which was attended by pupils, local Jewish charities, school staff and many friends.

The Beirut AIU school reopened in 1951 and did not finally shut its doors until the 1970s. 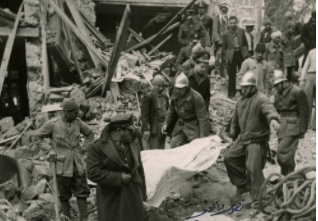 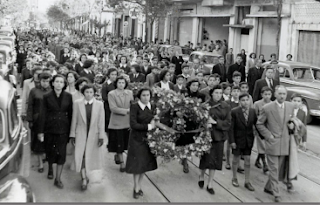 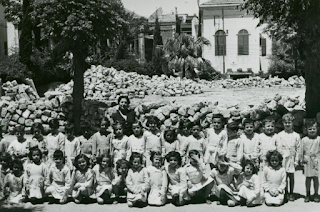 The photos (from top) show the bomb damage. Two were killed in the incident, including the school headmistress, whose funeral was attended by hundreds of pupils staff, officials and personal friends. One year later, the school re-opened.