Yemenite henna ceremony is the height of fashion

A traditional Yemenite henna  adorns the front page of  Vogue - the world's leading fashion magazine - who knew? The article, by Liana Satenstein with photography by Talia Collis, has a detailed description of the clothing and jewellery worn at the ceremony, which is even becoming popular among Ashkenazim.(With thanks: Michelle)

Approximately a week before a Yemenite wedding takes place, what’s known as a henna ceremony is performed. Just as the name suggests, the ritual involves the application of temporary natural dye to the hands of the bride in intricate patterns that symbolize fertility.

The crowning glory of her look, which comes in vibrant red—also to symbolize fertility—and gold, is a majestic beaded headdress, or gargush, that is in the shape of a cone and resembles a tiered cake. The headpiece weighs more than two pounds. But that isn’t the heaviest part: That’s where the jewelry comes in. She wears a chestful of necklaces, including one under her neck called a labbah, a thick collar of silver filigree beads braided into red yarn. 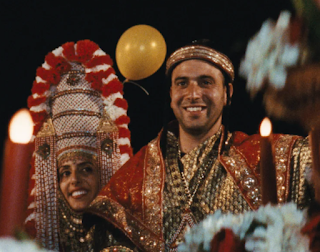 Avda and Ahivu Tsur at their henna

At the henna ceremony of Adva Tsur (née Zabari) last summer in Kadima, a town just outside of Tel Aviv, all of those beautiful sartorial customs were on display. “At first, it doesn’t feel heavy but after a while with the walking, dancing, it becomes very heavy on the chest,” says Tsur over the phone from Tel Aviv. “I felt pretty and I didn’t want to take the jewelry off even after the henna was over.”

Jewelry-making has a special place in Yemenite culture, and many silversmiths today in Israel are of Yemenite descent. The bride’s necklaces speak to that tradition—Tsur wears the traditional labbah, in addition to weighty pieces made from amber and silver, which historically represented wealth. In other words, the bigger the necklace, the richer the bride’s family.