Why US Jews should do more to recall Elghanian's death

Forty-one years to the day, Jewish businessman Habib Elghanian was repaid for his generosity  to Iran's Ayatollahs with his execution on false spying charges. The execution sent ripples of terror through the Iranian Jewish community, most of whom fled into exile. But the US Jewish community has not done enough to honour the memory of an Iranian patriot and to call the regime to account, argues Karmel Melamed in The Forward: 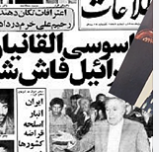 "In 1967, when the Islamic clerics of Tehran were in the middle of constructing their new and grand Hossieneh Ershad mosque in the heart of the city, their funds for the project dried up. They turned to individual Muslim business leaders and observant Islamic individuals for financial help to complete the grand mosque after work on it came to an abrupt halt.

But none of the sources were able to provide the needed funds to restart work on the mosque. So the clerics turned to a last option — Habib Elghanian, Iran’s most affluent businessman who was also the leader of Iran’s Jewish community, 80,000 strong at the time.

Without blinking an eye, Elghanian donated 250,000 rials to the Ershad mosque completion project, and encouraged other Jewish businessmen in Tehran to donate as well. And roughly 12 years later, those same Iranian clerics who Elghanian had helped thanked him by remaining silent as the radical Islamic thugs of the new Khomeini regime executed Elghanian on false charges of spying for America and Israel.

On May 9, 1979, after a sham, 20-minute trial, Elghanian was executed with a bullet to the heart by Iran’s Islamic revolutionary thugs. On May 9 of this year, the Iranian Jewish communities living in New York and Southern California will again be mourning the loss of Habib Elghanian, our leader.

It is a tragedy whose wounds have still not healed, even after 41 years. In 1979, Iran’s Jews were not only emotionally devastated by Elghanian’z killing; they quickly discovered their lives were at risk under the Ayatollah Khomeini’s regime."

Jenny K has an interesting Twitter thread and photos

More about Habib Elghanian
Posted by bataween at Saturday, May 09, 2020