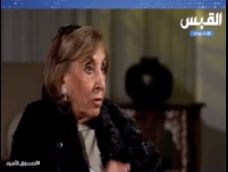 A video has been circulating unchallenged on social media that slanders the executed Jewish businessman Shafik Ades, accusing him of smuggling weapons from Iraq to the Zionists.

The video shows a well-heeled Iraqi lady being interviewed by the TV Channel Al-Kabs. The lady describes how Ades allegedly smuggled weapons destined for Israel by hiding them  under watermelons.  Several truckloads were dispatched from Iraq, she claims. There was an accident at the border and the smuggled weapons were discovered, she says.

Shafik Ades was hanged in front of his house in Basra  on 23 September 1948 after  a short show trial by military court.  Ades's execution was possibly the single most powerful reason for the mass emigration of Iraq's Jews  in 1950 - 1.

The intervieweee describes Ades an a permanent adviser to the king at the time. He was actually the agent of the Ford Motor Company with no links to Israel. In fact he was one of the wealthiest and best-connected businessmen in the country, and a personal friend of the Regent, Abdel-Ilah.  He spurned the chance to escape the country, believing his  connections would save him.


Before telling lies and fabrications about Shafik Ades, the interviewee cunningly establishes her credibility as a friend of the Jews. The neighbours were the Zilkha family and she tells how members of her own family were requested to act as 'Shabbat Goy', switching on lights or making the tea while work was forbidden the Jews on the Sabbath. The Jews were like family then, she says, nice people, implying that they subsequently changed and became traitors.

Ades had no time for ideologies of any kind. He was a pragmatist. Ironically at his trial, he was acccused of supporting both Zionism and Communism and donating money to the Iraqi Communist party, even though the communists were anti-Zionists.