Update: Reliable sources say that an “attempt” to burn the shrine resulted in some smoke damage but the fire was minimal.No arrests have been made.

Reports received by Jonathan Greenblatt, head of the US Anti-Defamation League, state that the tomb of Esther and Mordechai in Hamadan, Iran, has been set ablaze. There have been frequent threats to torch the shrine: this time,  however, they seem to have been carried out  to coincide with the anniversary of  Israel's establishment 72 years ago . The Jerusalem Post reports: 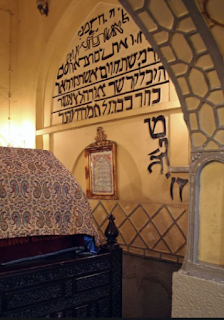 Inside the tomb of Esther

BERLIN - National Director of Anti-Defamation League (ADL) Jonathan Greenblatt announced Friday on Twitter that the tomb of Esther and Mordechai in Iran was torched. Disturbing reports from Iran that the tomb of Esther & Mordechai, a holy Jewish site, was set afire overnight. We hope that the the authorities bring the perpetrators of this antisemitic act to justice & commit to protecting the holy sites of all religious minorities in Iran,” Greenblatt tweeted. 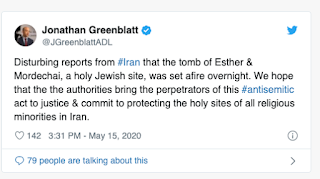 The Jerusalem Post is seeking to obtain the reports cited by Greenblatt in his tweet. Greenblatt has termed Iran's regime the top state-sponsor of antisemitism and Holocaust denial.
Prior to the arson of the tomb, one Twitter user named Mohammad Mahdi Akhyar threatened to destroy the holy site on May 14 in response to a tweet by the Israel's Foreign Affairs' Farsi Twitter page.

More about the tomb of Esther
Posted by bataween at Friday, May 15, 2020