A group of 26 Israelis landed at Ben Gurion Airport on Thursday morning after they were finally repatriated from Morocco following a weeks-long diplomatic crisis amid the coronavirus pandemic, which has claimed the lives of a dozen Moroccan Jews. The Times of Israel reports: 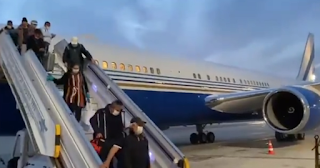 The group left Morocco on Wednesday and flew to Paris, where they boarded a private plane owned by billionaire couple Sheldon and Miriam Adelson, the Israel Hayom newspaper reported. The paper, owned by Sheldon Adelson, said that Likud MK Nir Barkat approached the couple and asked for assistance in bringing the Israeli travelers home.

According to Channel 13 news, at the start of the global pandemic, Israel reportedly approached the Moroccan government and began to coordinate efforts to repatriate the Israelis stranded in the North African kingdom. However, the plan was shelved after Foreign Minister Israel Katz tweeted that he had reached out to the Jewish community in Morocco and offered to extract people with dual Moroccan-Israeli citizenship.

Moroccan authorities often highlight their country’s tradition of tolerance and have worked to rehabilitate Jewish cemeteries and synagogues. Like most Arab states, Morocco has no official relations with Israel, but Israeli Jews visit every year to see the land of their ancestors, mark religious festivals and conduct business.

Moroccan officials were reportedly outraged by Katz’s tweet, which they viewed as insensitive, and refused to let the Israelis leave on either a commercial or private flight. The Israeli travellers began to run out of money, and started staying in houses of members of the Jewish community in Casablanca and hotels in Marrakesh, which were paid for by the Moroccan government, according to an Army Radio report last month.

At the start of May, talks between the Israeli and Moroccan governments were renewed on the matter, spearheaded by Israeli-Moroccan businessman Ilan Khatuel who became the de facto leader of the stranded travellers, and a man named by Channel 13 news as “Maoz,” the head of relations with the Arab world at the Prime Minister’s Office. Eventually it was agreed that the Israelis would be allowed to fly home.

Last month, Army Radio reported that the Moroccan government had refused to approve a joint Israeli-Emirati effort to repatriate the group.