Lebanon had a small Jewish community until the 1970s. The community was given a boost after 1948 by the influx of Syrian Jews fleeing the 1947 Aleppo pogrom and other disturbances. But many of those had false papers, or no papers at all.

The Lebanese historian Nagi Georges Zeidan has researched a link between Iran under the Shah (then pro-western, and with discreet links to Israel) and the fleeing Jews. Although there were Iranian Jews with genuine Iranian passports in Lebanon, a group of Jewish refugees who came to settle in the old Jewish quarter of Beirut were issued with false Iranian papers. 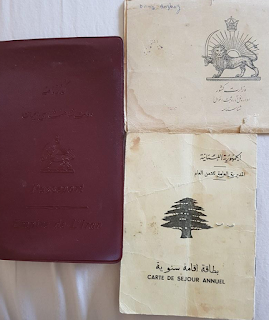 Lebanon was not willing to issue Lebanese nationality to these Jews, nor would it even grant residence permits. In order to leave Lebanon for the US or Europe, a Jew needed a passport or an entry visa. The Iranian operation began after October 1948, when the Lebanese security services, led by prince Farid Chehab, uncovered a racket to issue false Lebanese passports to fleeing Jews - mainly of the Beida, Anzarut, Matalon and Hazan families. The racket was run by a member of the Chatila family, together with three Lebanese Jews.

The Iranian passports were nominally genuine, since they bore the Embassy of Iran's stamp in Beirut. They were issued by order of the Shah of Iran after Jews had approached his Prime Minister. However, the passports were effectively exit papers allowing the bearer to leave Lebanon and apply for citizenship in a second country. They did not entitle the bearer to enter Iran, nor did they allow the bearer to vote at Iranian consulates around the world.

In the beginning, the passport holders had no trouble renewing their documents. But Iranian embassies and consulates abroad - especially in Athens, Paris and Milan - began to have their suspicions. The passports bore false civil identity registration numbers.

The game was up, and the passport holders found themselves back to square one - stateless. After he was visited by a Jewish delegation, the Shah of Iran agreed to grant Iranian nationality to the holders of false Iranian passports. There was a price to pay, however: a donation of some hundreds of thousands of dollars  had to be made to the Iranian Red Crescent and Red Lion services.

In the 1960s, Iraqi and Syrian Jews managed to buy Panamanean passports.

How a Syrian-Lebanese Jew became master of the arts