From travellers to settlers: European Jews in Iraq

In the old days, travelling was hard and dangerous from Europe to Babylon (Baghdad) or vice versa. Few Jews ventured there, but in the 19th and 20th centuries, several European Jews ended up settling in Baghdad. Historian Sami Sourani explains: 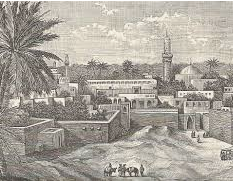 Baghdad in the 19th century

During the Abbasid Empire, there were two caravan routes linking Baghdad to Europe. When  the Calif Harun Al-Rashid wanted to send a gift to Charlemagne, he sent it via a Jew named Ishaq the Jew. This man spoke European languages, learning them  as he managed  the caravan routes to Europe.

Benjamin of Tudela travelled from Spain to all countries in the Middle East that had a Jewish population. He visited Baghdad as the guest of a Jewish family. In his memoir, he described the Jews as very well -versed in the Torah. He  even drew up a table showing how many weavers, carpenters, saddlers, merchants, and shopkeepers it had. His trip took ten years and when he arrived back in Tudela he wrote his famous book The Itinerary of Benjamin of Tudela.

Five hundred years later, a rabbi from Ratisbon, Romania (real name Benzion Yisraeli)  set out  to follow  the itinerary of Benjamin of Tudela. In Jewish history books, they nicknamed  him Benjamin the Second.

He arrived in Baghdad in the late 19th century. He was  the guest of a Jewish family called  Bet Al-Ghawwil. He was also hosted by the head of the only Yeshiva in Baghdad, Midrash Bet Zilkha. The head of this Yeshiva was the late Haham Abdullah Sasson Somekh. Yisraeli was impressed by the Jews' knowledge of Torah and other Judaic subjects. He asked many questions and documented the  answers in his memoir. For one question he did not get any answer: "Why did the Jews of Baghdad arrange the marriages of their daughters at a very early age?"

Owing to the distance and risks,  few European Jews came to Baghdad and settled there. Let me mention the few who did in the 19th and 20th centuries.

* Mr. Ishaq Lanyado, a watchmaker who came from Italy and was instrumental in convincing the Baghdadi Jews to have an Alliance Israelite School.

* Mr. Herman Rosenfeld came fro Austria. He had one son, an engineer, and another, a physician.

* Dr. Samuel Adato  came from Salonica in Greece. He was a dedicated physician whom the Jews loved dearly.

* Dr. Kich, a physician from Hungary. He left after a few years.

* Dr. Robertchuk, an eye doctor from Czechoslovakia who stayed in Baghdad for several years. He married a local Jewish woman.

*Mr. Saphir from Romania,  a businessman. He settled in Baghdad and married a local Jewish woman.

* Mr. Bonfate from Algeria came to be the administrator of the Alliance school.

*Dr. Max Grobach, a physician, came from Germany and settled in Baghdad together with his wife. He died in 1947 and was buried in the Jewish cemetery in Baghdad.

* Dr. Max Makovitsky, a physician from Latvia came to Baghdad in WWI. He served with the Russian army. After the revolution, he escaped to Baghdad with his wife. He was the most successful medical doctor. He became an expert in  the diseases of Iraq and he was appointed to be the private physician of the King and the royal family.

He used his contacts to secretly help the Iraqi Jews. When the then Iraqi government wanted to put all the Jews in a concentration camp in 1947/48, he went to the Regent and  persuaded him not to  follow such a policy. The Regent accepted his advice.

This doctor loved to collect antique Persian carpets, woven in silk with pictures that tell a story. He had a large number of them in his mansion.

After the revolution of 1958 and the massacre of the king and royal family, he was afraid for his life. He fled to Switzerland with his wife, leaving a mansion full of treasures. After living in Switzerland for almost three months, his wife and himself died. They had no children. He is a man that deserves true respect.

More from and about Sami Sourani