Fifty-five years since the execution of Eli Cohen, spy extraodinaire

Everybody has secrets, but Eli Cohen, the Israeli spy hanged in Damascus in May 1965, had more secrets than most. Some he literally took to his grave. Liat Collins of the Jerusalem Post writes on the 55th anniversary of Cohen's execution: 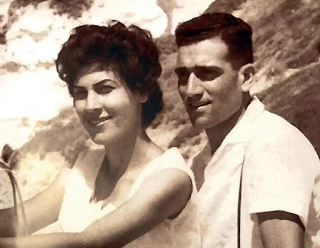 Eli Cohen with his wife Nadia


Tragically, his burial place in Syria is among the unknown.

Many of the mysteries surrounding the super-spy have been revealed over the years, others we might never learn, but Cohen’s courage and fate have returned to public consciousness lately.

The story of the agent’s life, capture and execution were the subject of a Netflix series last year starring Sacha Baron Cohen. While the poetic license taken in The Spy upset his family, the dramatization did at least attract broad international attention to the affair.

I devoured the Netflix version of Cohen’s life, which managed to maintain tension throughout despite the fact that viewers knew there would be no happy ending. His wife, Nadia, would be left a widow with three very young children.

This week, KAN 11 began broadcasting a documentary series “Lochem 566,” (Fighter 566, Cohen’s Mossad codename). Again, I found myself riveted to the screen as I watched the first of three episodes on Sunday. This was Cohen’s story told – to a large extent – in his own words.

The production team, led Itai Landsberg, a veteran Israeli documentary maker, based a lot of their research and footage on the actual court records of his trial in Damascus, which they found in an IDF archive. It is chilling, but compelling to see and hear Cohen answering the judge’s questions, providing his story in first person.

The best-known of Eli Cohen’s exploits was that the spy persuaded the Syrian army to plant eucalyptus trees on its bases on the Golan Heights which gave Israel their precise locations when the Six Day War broke out in 1967. Landsberg told Yisrael Hashavua’s Ariel Bulshtein that they were not able to confirm this particular widespread belief. But even without it, Cohen’s achievements acting in the guise of flamboyant businessman Kamel Amin Thaabet were incredible.

More about Eli Cohen
Posted by bataween at Tuesday, May 19, 2020

One of the things that countries in common are the crime of spying for another country.

So He is aspy for Isreal caught red-handed with his action, he committed a crime?

Incomparable if one of Jews or Arb inside Israel carry same act what this spy did what will be his final moment if he fought redhanded spying for Arab State?