The Ramadan TV series Umm Haroun tries to portray Middle Eastern Jews as a bridge between Israel and the Arab world. But deep-seated religious and cultural prejudice against the inferior dhimmi Jews has caused much vituperation, argues Shaul Bartal of the BESA Center (with thanks: Laurence, Frank, Melvyn) 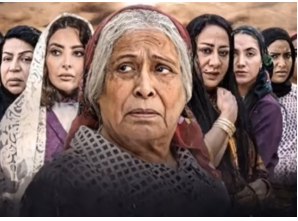 Um Haroun’s attempt to show the human side of the great suffering endured by Middle Eastern Jewry has aroused harsh criticism in the Arab world, mainly because of its alleged attempt to promote the trend of tatbia (normalization with Israel). The Zionist narrative of Middle Eastern Jewry does not jibe with the Arab-Palestinian narrative, which portrays Zionism as a European colonialist movement that is foreign to the Middle East.

An article on arab48, which is affiliated, among other things, with the more ultranationalist elements in Arab Israeli society, accused the series of “legitimizing the normalization of relations between Israel and the Arab states,” which it considers anathema. The article asserts that, contrary to the Zionist view that the “Arab Jews” were a persecuted group, they formed “part of the Arab nation and a religious minority within it, an essential part of the mosaic of communities that lived in the Arab East and in Muslim Spain,” and their move to Palestine was a reflection of “Jewish arrogance.”

The “Arab Jews” who (supposedly) lived with honor in the House of Islam thought they were coming to a land of milk and honey but instead, so the article claims, encountered humiliation and discrimination at the hands of the European Jews—because Zionism, after all, was no more than a European colonialist movement. Hence, the article asserts, the Um Haroun series serves Zionism because it presents a false narrative that sins against the historical truth. Criticisms in this vein are plentiful across Arab social networks and media channels.

In the Middle East there are only “Palestinian refugees.” There is no room for other victims. The State of Israel, over half of whose Jewish citizens are descendants of former dhimmis, is an existing fact.

The indigenous Jews of the Middle East, like their brethren from other Diaspora communities, returned to their ancestral homeland and together reestablished the Jewish state there. Um Haroun insinuates that the Jews of the Middle East could serve as a bridge for coexistence and understanding between Israel and its neighbors. Unfortunately, the series has mainly sparked vituperation in the Arab world.

More about Arab reaction to 'Umm Haroun'
Posted by bataween at Thursday, May 21, 2020