Are we Arab Jews, Arabic Jews, or Jews from Arab lands?

Rachel Wahba's Jewish identity is beyond question, but she acknowledges an 'Arabic' component in this Times of Israel blog. Is she in danger of playing to the recent tendency to treat Jewish culture  as a subset of Arabic and Jews as Arabs of the Jewish faith? And what constitutes Arab anyway? As you can see from the comments on Rachel's Facebook page , the issue is still fiercely controversial. 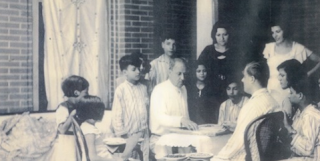 A photo from the Wahba family album

Yes, we were never Arabs, we were Jews. No matter how many centuries our communities existed in these lands, no matter, unless we converted to Islam. A thousand-plus years was not enough. Simply put, we were never allowed the status of “Arab.”

And yet, how can a people live for centuries in a majority Arab culture, sharing language, music, superstitions, curses, food, customs, not be “Arabic?” We blended. “Like chameleons,” my mother said. To a point. With of course, our cultural and religious particulars.

We were traditional/Orthodox Jews, we were Arabic-speaking kosher-eating synagogue-going Jews. In my parents’ childhood, middle-class Jews went to French Catholic or the Jewish Alliance Israelite schools all over the region. Like my mother in Baghdad and my father in Mansoura, they had a bilingual education, in Arabic and French.

At home, my mother spoke the Iraqi Jewish dialect, my father Egyptian Arabic. I was born to Arabic Jews who were disowned by their native lands while we were foreigners in Japan. I will never have that sense of belonging most of my relatives who survived the maabarot have now as Mizrahi Israelis.
Memmi’s Arabized Jews of Tunisia and Sami Michael’s impoverished Arab Jews of the Jewish quarter in Baghdad are a thing of the past. Neighborhoods change. Almost overnight populations shifted. Arab Jews became Israel’s Mizrahim. Our heritage is carried in the Mizrahi presence in Israel.

Arabic, no longer an unwanted tongue brought in by Arab Jews, is sexy and embedded into everyday Hebrew.

Identity shifts. Arab/ic Jews existed in Arab lands. For the most part with bowed heads, second class status, persecution at the whim of rulers, seen as filthy polluters. Nostalgia aside, it wasn’t idyllic. For the first time since the Romans renamed our Homeland and put too much disaster in our lives, we Jews can be full on both native and Jew in Israel. But don’t erase. We were Arabic before we earned a new identity as Mizrahim, in Israel. Without apology, without confusion, without hiding, and without explaining myself/ourselves, to the point of exhaustion, I/we are Arab Jews.

More articles about 'Arab Jews'
Posted by bataween at Monday, May 04, 2020