A skilful and saddening read: 'The Wolf of Baghdad' reviewed

The Wolf of Baghdad: Memoir of a Lost Homeland, a new graphic novel about the Iraqi Jewish experience, is testament to the power that Iraqi roots can still possess across a seemingly definitive distance. Mardean Isaac reviews Carol Isaacs' new book in The Tablet:

Carol Isaacs, author of this skilful and saddening book, is a cartoonist known for her work in The New Yorker as The Surreal McCoy, and an accomplished musician. She was born to Iraqi Jewish parents in London. Her family home was in Wembley, an area of northwest London with a Jewish population of various backgrounds. It would transform into a vessel of life from the old country when visitors came on Sunday. Her parents and grandparents spoke Judeo-Arabic. But talk of life in Iraq, and the shock of her family's expulsion from it, was mostly absent. At her “very British” school, Jews were a minority and Isaacs a Mizrahi minority within that minority, but she learned from her Ashkenazi friends that European Jews had also experienced expulsion and dispersal. 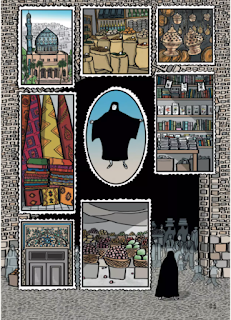 In The Wolf of Baghdad, Isaacs, who has never been to Iraq, places her present self into the imagined past of her ancestors. At the outset of the narrative, her graphic avatar is transported from a torpid evening in the company of family photographs in her northwest London apartment by music to an ancestral Baghdad.

She navigates the city—now inhabited by ghosts—as an observer under a cloak, the same abaya her grandmother used to wear to pass unnoticed in Arab society. The figures she encounters are defined by their translucence: disembodied references to a once richly tangible world. She and they walk the same paths, but separately.

The absence of talking in the action of the novel affirms the distance intervening between Isaacs and the Iraqi Jewish experience she portrays. At the outset of this book, the faces of Isaacs’ family are arranged as portrait miniatures hanging like dates from a tree. The graphic narrative alternates with pages of sparse testimony, provided to Isaacs by her family and other Iraqi Jews, paired with portraits of their younger selves shaped like postage stamps.

More about 'The Wolf of Baghdad'

More from Mardean Isaac
Posted by bataween at Thursday, May 14, 2020