The Syrian Jew who saved 527 children from the Holocaust

They called him 'Monsieur Marcel'. Today, on Yom Hashoah, it seems appropriate to remember Moussa Abadi,  a Jewish writer and Resistance fighter, born in Damascus in 1907. He settled in France in the 1930s. With his fiancée Odette, he created the “Marcel Network” in 1943 and saved 527 Jewish children in southern France during the Holocaust. 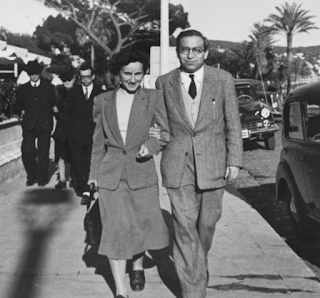 Odette and Moussa Abadi in Nice in 1947

Helped by a bishop and a pastor, the “Marcel Network” hid Jewish children and gave them fake IDs. Odette was arrested and tortured by the Gestapo in 1944. She was then deported to Bergen-Belsen. She survived the camp at the end of the war, and the couple got married in 1959.

The Guardian ran this obituary for Odette, who committed suicide in 1999:

In 1942, Moussa Abadi, a Jewish student and writer whom she had met in 1939, asked her to join him in Nice. He had set up a resistance organisation to help Jews from a widespread area of southern France, then unoccupied by the Germans, to take refuge in Nice where the Italian occupying forces largely ignored their presence. Odette became his chief helper, taking the resistance name of Sylvie Delatre. In September 1943, Odette and Moussa faced a terrible crisis. An armistice was announced between the Allies and the provisional Italian government. The Italian army withdrew from Nice. Immediately the Germans entered the town followed by Captain Alois Brunner and a special unit of SS police. Their objective was to round up the Jews who had survived because of Italian leniency.

Thus began one of the most vicious episodes of the Holocaust. The Germans used every method to root out the Jews - from torture to bribery. Inevitably Odette and Moussa were besieged by fearful parents. The house would have been overwhelmed had it not been for the Bishop of Nice, Paul Rémond, who provided them with a room in his official residence. He also persuaded a number of Catholic schools and individuals to give children hiding places. The violence of the Germans was such that even local Vichy officials offered their help by supplying blank ration cards.

In spite of all the difficulties, 527 children were saved, hidden in sanctuaries along the coast. In April 1944, the inevitable happened: Odette was denounced. The Vichy special police, the "milice", arrested her and she was deported to Auschwitz-Birkenau and then Bergen-Belsen. There she worked as a doctor, looking after those who were too ill to be sent to the death chambers. She survived and returned to Paris.

Email ThisBlogThis!Share to TwitterShare to FacebookShare to Pinterest
Labels: Holocaust in Arab and Muslim lands, Jews of Syria