The Gourion family produced Mimouna pancakes - and a priest

The Algerian Gourion  family of Oran were famous for two things: running a bakery and producing a priest. An interesting article by Charles Bunan in the Gazette de Morial  enlightens us (with thanks Leon): 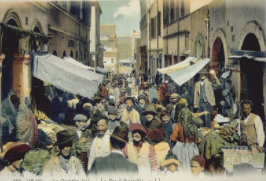 Rue d'Austerlitz in Oran, where the shop  Zouzou sold cheese and whey consumed during the Mimouna (Photo: Mahj)

The bakery came into its own at the end of the Passover festival, when North Africa Jews celebrate Mimouna. Long queues of customers wishing to purchase the bakery's pancakes (moufletta) stretched out into the street.

Charles Bunan recalls how Mimouna was marked in his Oran home. Two cups were set on the dining room table - one with flour and  green beans, the other with a gold coin set in dough which rose all night. The family meal ended with the traditional couscous in butter. All the homes in the street had their doors open, and the families went from house to house tasting stuffed dates, prunes and other sweetmeats.

The priest in question is Jean-Batiste Gourion, born in 1934 into an Oran Jewish family. Gourion studied medicine and natural sciences in Algeria and Paris. On Easter night in 1958 he was baptised in Normandy. He became a monk and was ordained a priest in 1967.

France owned a priory at Abu Ghosh, just outside Jerusalem. At the French Consul-general's request, Gourion was sent to Israel. He became prior and then father abbot in Abu Ghosh.


Read article in full
Posted by bataween at Thursday, April 23, 2020