Ashkenazim settled in Syria and Lebanon in the 19th century, while German doctors came to Iraq fleeing Nazism.  These interesting snippets come from Nagi Zeidan, the historian of the Lebanese Jewish community,  and from the Babylonian Jewry Heritage Center in Israel. 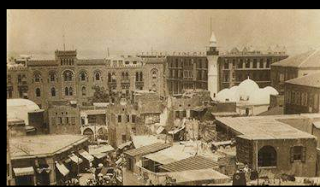 In 1902 Bernhart, son of Adolphe-Gabriel Israël and Hermine Morgenstern, born in 1884 in Schneidemül, Poland  arrived in Aleppo as director of the Orozdi Bak Store in this city. Israël was a common family name among Sephardim, but this branch of the family had married Ashkenazim. As there were no Ashkenazi families in Aleppo, Bernhart headed to Beirut where there was an important Ashkenazi community.

Two brothers from the Ashkenazi family of Grünberg, Moise and  and William, both born in Hamburg, lived in Beirut and Zeidan found their graves in the Jewish cemetery of Beirut. In 1902 Bernhart Israël married Pauline, daughter of William Grünberg and Sophie Brasseur, who was born in Beirut in 1888.

They had four children: Adolphe, born in 1909 became the greatest cardiologist in Lebanon. He was a member of the doctors' union in Beirut in 1948. Another daughter of William's, Wanda Louise, died in childbirth. Her husband Isaac Sakkal raised his two daughters alone. He was later abducted by the Gestapo in 1942, presumably in Europe.

William's son Armand married Ilona Laszlo whose father Moritz was born in Vienna. The Lazlos arrived in Beirut to escape the Nazis in 1938. During WW2 many Ashkenazi Jews fled Eastern Europe illegally to escape the Nazis and settled in Wadi Abu Jamil (the Jewish quarter of Beirut). Elderly Lebanese Jews still remember that marriages of convenience were arranged with  refugee girl students. They came to study at the American University of Beirut because the Hebrew University was still in its infancy, or because they could not get permits to enter British mandate Palestine.

A group of Yiddish-speaking Ashkenazim arrived in Beirut in the 19th century.
Historian Nagi Zeidan says that this community intermarried with the Jews of Beirut but continued to retain an Eastern European accent in Hebrew. In time their Yiddish names were replaced with Sephardi ones. By the 20th century, French first names were also popular.


Nagi Zeidan points out that following the Crimean War in 1853 between Russia and Ottoman Turkey, several Ashkenazi families from Eastern Europe settled in Baghdad. The Austrian  couturier Hermann Rosenfeld had two sons who joined him later. One was an engineer and the other, Joseph, had graduated in medecine at St-Joseph's College in Beirut.

Ashkenazi doctors fled the rise of Hitler in 1933 and came to Iraq. Dr. Sustmann, Dr. Tucker, Dr. Rossano  and Dr. Strauss left Germany with passports.  They arrived in Turkey and from there made their way to Iraq.

At that time, Moshe Cohen, the shaliah (envoy) from Israel, commonly known as "Moshe Abu al-Laban"because he sold yoghurt as a camouflage for his activities, lived in Baghdad. Learning  of the arrival of the  doctors from Turkey, he managed to find accommodation at the Alliance school for them through his contacts.

They could not leave the building. Community members supported them. The Jewish community wanted to employ them but they were not granted a work permit nor permission to remain in Iraq.

Just then the wife of Jamil al-Madfai, who was to become Prime Minister, requested a female doctor to treat her. Dr Tucker, a specialist in women's ailments, fitted the bill. Both she and Dr Sustman managed to find work at the Meir Elias hospital. Thus the Jewish community could use these doctors' expertise - and save Jewish refugees from the Nazis.
Posted by bataween at Wednesday, April 29, 2020

Email ThisBlogThis!Share to TwitterShare to FacebookShare to Pinterest
Labels: Holocaust in Arab and Muslim lands, Jews of Iraq, Jews of Lebanon