Israel's senior rabbis declared that it was not allowed to bring isolated family members together via video conferencing for the Passover seder, the Times of Israel reports.
.
The Chief Rabbinate on Tuesday issued guidelines for Passover in the age of coronavirus, saying it was not permitted to hold the traditional Seder by videoconference and dismissing a previous ruling by several rabbis who said it was allowed. 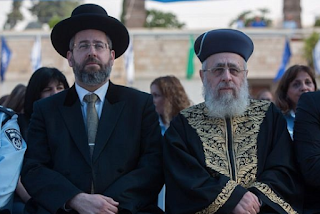 In what may have been one of the boldest rulings issued on technology in recent years, 14 Sephardic Orthodox rabbis in Israel last week declared that families may conduct their shared Seder over videoconference, despite Orthodox religious law normally banning the use of electronic devices on Shabbat and festivals.

Every community must be guided by its own rabbi, with the individual family's peace and safety in mind. Since open seders have been banned in most cities, the home owners cannot sit down with their parents, grandparents, aunts and uncles, grown children and grandchildren.

Zoom is set up _before_ the yom tov starts and doesn't involve any handling of electric goods by the participants once it is up and running. Senior rabbis banning Zoom is therefore unnecessary, hurtful and disrespectful to our parents and grandparents.

Wishing all your readers a healthy, peaceful and kosher pessach.