The southern Moroccan town of Sefrou, 30 km from Fez,  was once so predominantly Jewish that it was called 'Little Jerusalem'. This Eurasian Review article by Mohamed Chtatou gives a potted history of the community, its prominent families and holy sites. But it begs the question: If Sefrou was paradise on earth for its Jews, why did the last Jewish family leave in 1985? (with thanks: Lily) 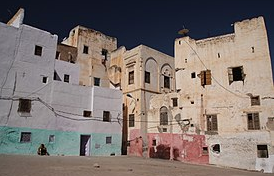 Despite its small size, Sefrou contributed enormously to Jewish culture in Morocco. The rabbis who were there were famous all over the country and even beyond Moroccan borders.

Many rabbis settled there and taught, and their works concerned all the domains : the laws, the sacred texts, the Cabal, the songs and the praises, the moral etc. The influence and the importance of this city within Moroccan Judaism, made it central and that is one of the many reasons for which it was commonly called “Little Jerusalem.”

In the image of plural Morocco with its cities where Muslims, Jews and Christians rubbed shoulders and coexisted in total peace, the city of Sefrou had hosted for centuries a community of Moroccans of Jewish faith. It was made up of Amazigh/Berber-speaking locals, Tafilat natives, Arabic-speaking Jews of Fassi origin (from Fez) and even descendants of the Spanish exiles of 1492, the megorashim.

This is the case of the El Baz family. For many generations, the Rabbi occupied a very important place in the life of the Jewish community. His extensive knowledge and scholarship directed him both in law, in his life style, and attitudes to adopt. He became adviser for personal problems, but also judge in conflicts between members of the community and practised highly-recommended mediation between Jews as well Muslims and Jews or just Muslims. He, thus, helped reconciling between men, between a man and his wife, and even materially supported those in need. He was considered a sage of the city by all its inhabitants.

The Mamane family belonged to families linked to the expulsion of Jews from Spain, as well, the majority of whom are concentrated in Marrakech, Meknes, Fez and Sefrou. The older generations considered the family Ben Mamane as descendant of the “Great Eagle”, the guide of all Israel that descended from King David. Formerly, the members of this family were named Ben Maïmoni, then the name contracted in Ben Mamane, and it is only recently, that the word “Ben” disappeared, and they answered to the name of Mamane. This evolution is indeed confirmed by the testimonies of the oldest inhabitants of Safed and Tiberias, such as Rabbi Shlomo Ohana emissary of Israel in Morocco, sometime in the past.