Rachel Muyal z"l, a guest at a royal Moroccan seder

Morocco's only female Jewish public intellectual, Rachel Muyal,  died in January 2020.  Writing in Tablet, Vanessa Paloma Elbaz recalls the life and times of this remarkable woman from Tangiers, and how a year ago she was invited  to a Passover seder attended by members of the royal family and their Jewish friends. 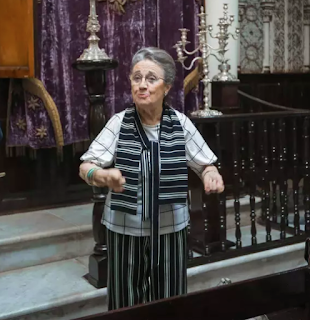 
Rachel embodied the tightrope balance that public-facing Jews master in the Muslim world, maintaining her “Tangerine” Judaism of being open to the world, while nurturing her identity as a Jew and a professional woman.

Her job as manager of the Librairie des Colonnes made her the de facto gatekeeper for the American counterculture writer Paul Bowles. Her living room hosted Bowles, Jean Genet, Mohamed Choukri and Tahar Ben Jelloun.

She was the public face of a moment in history that is rapidly escaping the lived experience of younger generations of Moroccans. During the last years of her life, Rachel often mentioned her desire to write a book about the Jews of Tangier and the city’s openness. She often repeated, we lived juntos pero no revueltos, together but not mixed—as in not intermarried.

And she once confided to me, “As a divorced woman, I had many proposals from all sorts of men, and very powerful ones at that. I had to become very creative in finding ways to say no.” Her life was in some ways reminiscent of the Judeo-Spanish song “El Romance de Sol” that was sung in her home on Passover by the rabbi’s wife when they came for lunch. The song tells the story of the beautiful Jewish virgin martyr from Tangier, Sol Hachuel, or Solika, a poor and pious adolescent who preferred death as an accused apostate over conversion to Islam and marrying the sultan. Jewish women in northern Morocco have been singing this song since the 1940s to teach the younger generations not to succumb to assimilation or intermarriage. The main line that is seared into everyone’s memory says I was born a Jew and will die a Jew.

In the last years of her life, Rachel finally did write her memoirs. On the first day of Passover 2019 she launched La mémoire d’une Tangeroise to a standing room-only crowd during the International Book Fair in Tangier. As she was signing books, the palace’s secretary came over and told her to be ready at 7:30 in front of her house for a car to come and pick her up. She declined, claiming exhaustion, but was reminded that no was not an acceptable answer for the royal family.

She told me, “I am an expert in pushing food that I can’t eat around my plate, so I wasn’t too worried about going to the palace the night of the second Seder, I wouldn’t eat what was forbidden.”What transpired that night in the Royal Palace of Tangier with four Moroccan Jews and four Muslims of the Alaouite dynasty sheds light on the inner core of Moroccan Judeo-Muslim relations. As the guests were seated at the table, Rachel saw to her surprise that each setting had a Passover Hagaddah by its side. Waiters strode in carrying covered silver platters over their heads. When they uncovered them, the full Seder plate was revealed, karpas, maror, haroset, matzo, everything!” she told me. “We did the full Seder, we did not skip a word, we sang the bibilu, ha lahma anya and did all the plagues, nothing was skipped over.

"I couldn’t believe it. I guess the royal family wants to connect to our glorious moments. And as I was sitting there, I could see the phantoms of the previous sultans walking by. I could see Moulay Abdelaziz, who reigned from 1894–1908 and died in 1943 in Tangier. His grandson was sitting with us at the table that night. I kept on thinking, ‘we are doing Passover, our Jewish moment of royalty, sitting at a true royal table, a table of kings.’ In Tangier we Jews call our children ‘my king’ because we consider all our descendants to be royalty.”