This important piece by Sean Durns in Mosaic, on the 100 th anniversary of the Nebi Musa riots, shows not only how the Arab mob could be successfully unleashed for internal political purposes, but that  British failure to punish the instigators of the riot was interpreted as encouragement. 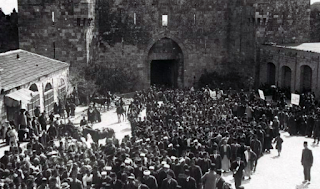 An anti-Zionist demonstration in Jerusalem on 8 March 1920

Palestine remained under the control of the British Occupied Enemy Territory Administration (OETA), a military government established in October 1918. Many leading OETA officials supported Faisal in his claims not only to Syria proper but also to Palestine. To some of them, giving Faisal Syria seemed the best way to strengthen British and frustrate French designs on the territory, and throwing Palestine into the bargain would help guarantee his success. Others backed Faisal precisely because they wished to undermine Balfour—whether out of practical considerations, hostility to Jews and Zionism, or some combination.

Thus the OETA sought to assist Faisal in presenting London with a fait accompli in the form of a “United Syria” under his rule. Already in early 1919, the Zionist leader Vladimir Jabotinsky observed, “The Palestine authorities are acting in a manner which clearly tells the Arabs that the [Balfour] Declaration need not be fulfilled.

A group of pro-Faisal Arab activists instigated street action, hoping to influence the ongoing intra-Arab and intra-British debate about the fate of Palestine. On April 4, 1920, at the peak of the Nebi Musa festival, for which tens of thousands of pilgrims annually streamed into the area, anonymous Arabic-language notices began circulating in Jerusalem stating, “The Government is with us, [the British general Edmund] Allenby is with us, kill the Jews; there is no punishment for killing Jews.”

Then, as the American foreign-policy expert Bruce Hoffman documented in his 2015 book Anonymous Soldiers.

"By mid-morning, a large Arab crowd had gathered just outside Jaffa Gate. Egged on by tendentious speakers from the nearby Arab Club, the crowd began to chant the rhyming Arabic couplet “Palestine is our land, the Jews are our dogs!”

" Holding up a picture of Faisal, Haj Amin al-Husseini—whom the British would appoint grand mufti of Jerusalem the next year—shouted, “This is your king!” Others in the crowd proclaimed, “Faisal is our king!” A newspaper editor and enthusiastic Arab nationalist, Aref al-Aref, cried “If we don’t use force against the Zionists and against the Jews, we will never be rid of them.” The frenzied crowd began shouting “We will drink the blood of the Jews.” The two ingredients—packed streets and fervent instigation—combusted. The pogrom had begun.


Thousands of Arabs ran through the Jerusalem streets, throwing stones at Jews, destroying Torah scrolls, setting a yeshiva and several houses on fire, breaking into buildings, looting, and so on. They did so for four days, from April 4 to April 7, with little intervention from the British authorities until the very end. By the time the riots were over, five Jews and four Arabs were dead, and hundreds more Jews injured, some critically.


Zionist leaders were outraged. Beforehand, several had expressed concerns about the increasingly tense situation—only to have those concerns dismissed. When the bloodshed erupted, Jabotinsky approached the military governor of Jerusalem, Ronald Storrs, requesting permission for armed members of the Haganah, a recently created Jewish self-defense organization, to be deployed to protect lives and property. Storrs refused. British troops even barred Haganah members from entering the Old City in order to defend their fellow Jews. Some Jewish leaders, including Jabotinsky and others on the Zionist right, interpreted the British reaction to Nebi Musa as evidence of broken faith.

They now doubted Britain’s commitment to the Balfour Declaration, and their doubts would continue to grow in subsequent years. Indeed, in the riots’ wake, the new civilian governor, Herbert Samuel, pardoned both Husseini and Aref, as well as Jabotinsky, who had been charged, along with nineteen Jewish defenders, with illegal possession of weapons and who had in a gesture of “evenhandedness” initially received the same sentence as Husseini. And, as mentioned, the British later tried to appease Husseini by naming him grand mufti and leader of the Supreme Muslim Council—overtures he would repay by allying himself with Hitler.

A precedent had been set. The Nebi Musa riots were followed by yet more anti-Jewish violence during the era of British rule, violence which would culminate in the revolt of 1936-39, and which would then resurface in 1947. As for Faisal’s dream of a “Greater Syria,” it would never come to fruition. French forces deposed him on July 25, 1920, and thereafter Syria and Lebanon went one way, Jordan and Palestine another. Subsequently, many of his supporters would come to see a separate Palestinian Arab state as the only practicable antidote to Zionism. But that belatedand freedom-loving desire for an independent Palestinian state did not inspire the anti-Jewish violence that occurred 100 years ago.

When trying to make sense of Arab violence in the Middle East, whether recent or historical, Western analysts tend to fall back on predictable clichés: riots result from resentment, oppression, poverty, or perhaps “ancient hatreds”; where the riots involve Palestinians, they are also the result of frustrated national aspirations. Sometimes there are elements of truth in these clichés, but most often they obscure more than they illuminate, especially when combined with the equally misguided tendency to see Arab politics solely through the prism of Western or Israeli policies. In the case of the Nebi Musa riots, none of these explanations fit.

To the extent that national aspirations were involved, they had nothing to do with Palestinian statehood, and everything to do with the incorporation of Palestinian Arabs into Greater Syria. Nor did accusations of mistreatment figure into the incitement that set them off. Rather, the riots were, first, an attempt to influence Arab opinion by showing support for the Syrian rather than the Egyptian solution. Second, and more importantly, they were intended to influence British opinion in the same direction.

Today, when Palestinian Islamic Jihad or Hamas fire rockets at Israel, or the Palestinian Authority’s Mahmoud Abbas incites Jerusalem Arabs to violence, the proximate cause often has as much to do with internal Palestinian politics as anything else. The relatively muted response to America’s decision to move its embassy to Jerusalem shows just how much Westerners exaggerate the importance of their decisions. But that is not to say that international actors have no influence at all, and this brings us to the second lesson of the Nebi Musa riots: when powerful figures encourage anti-Zionists to think their cause might be successful, the result is often the shedding of Jewish blood. By their manifest lack of commitment to the terms of the Balfour Declaration, local British authorities signaled to Arab leaders that some inconvenient disturbances might suffice to move the needle in London.

The mandatory government then made matters worse with its demonstrations of “evenhandedness,” which amounted to meting out the same punishments to the instigators of violence and those who sought to defend themselves against it—and then pardoning everyone. Were this not bad enough, the British rewarded Husseini for his role by creating the position of grand mufti of Jerusalem and bestowing it upon him. He concluded, not unreasonably, that the risks of instigating pogroms were low, and therefore resorted to this tactic in 1929 and then again from 1936 to 1939.

Saved by a liqor glass, betrayed by friends

Remembering the Libyan riots of 1945

According to Colonel Richard Meinertzhagen, a British intelligence in his book, Middle East Diary, British officers who were part of the administration of the country, particularly Colonel Waters-Taylor, deliberately encouraged or instigated Haj Amin el-Husseini to lead demonstrations of riots against the Jews in April 1920, in order to influence the San Remo Conference, meeting at that time, to not set up a Jewish National Home in the country.

Meinertzhagen was a British intelligence officer who reported, I believe, to the Foreign Office. In addition to his book cited above, a facsimile of a note or draft telegram that he sent to the Foreign Office is found in one of the volumes of the Arno Press collection of British mandate documents. This note or draft telegram asserts in brief form that British army officers were inciting Haj Amin el-Husseini, a leader of Arabs in the country and scion of an old, influential Muslim family, the Husseinis, to instigate riots among Arabs to take place in Jerusalem during the San Remo Conference in order to persuade the Conference that the Jewish National Home idea was not workable. As it happened, the Conference endorsed the Balfour Declaration, incorporating it into its final statement and thus into international law. On the ground in Jerusalem, at least five Jews were murdered in Jerusalem while Jabotinsky [himself an officer in the British organized Jewish Legion] who had organized Jewish defense, was seized and jailed in the Akko [Acre] jail.

A century old pogrom 1920 [ https://books.google.com/books?id=WxYbDgAAQBAJ&pg=PT114 ] , left by. Aref, incited by [ex mufti] al-Husseini.
His henchmen include holocaust denier (1972 at UN; 1978 at peace summit Camp David, the fraud Issa Nakhkeh (in 1981 lecturer at IHR on behalf of Muslim Congress, linked to, worked with major neo nazis publications and groups) and the genocidal Ahmad Shukairy (the inventor of apartheid slur 1961) who questioned loyalty of Catholic Uruguayan rep. Fabregat stating his Jewish; got booted (end of 1962) from UN after saluting Nazi gang
Comments

see the article "The jews are our Dogs seen in Old City"
https://jewishrefugees.blogspot.com/

The More things seem to change the more they are still the same
"Jews Defend Yourselves!" Jabotinsky.....