Baghdad leaps from the page in new cartoon memoir

The Wolf of Baghdad animated movie by Carol Isaacs has been made into a book. Vivid images of Jewish Baghdad leap from its pages. Review in Jewish Renaissance by Lyn Julius:

The Finns have a word for it: kaukokaipuu,  - a feeling of homesickness to a place you’ve never been.The place is Baghdad, capital of Iraq. A third of the city’s inhabitants were Jewish in the early 20th century. Indeed, Jews made up the largest  single ethnic group.

The kaukokaipuu  sufferer is Carol Isaacs, whose family  were part of the 2,600-year diaspora in Iraq stretching back to Babylonian times. A professional musician and accomplished cartoonist known as  the Surreal McCoy, Isaacs  has set herself the task of recreating, appealingly and movingly,   pictures of Jewish life in Baghdad until the community’s demise  50 years ago.

The result is her graphic novel, The Wolf of Baghdad: memoir of a lost homeland. The bookgrew out of a silent movie (animation), which  premiered in London in 2018 to  the accompaniment of live music by 3yin, an oriental ensemble, in which  Isaacs herself played the accordion. The book begins  in the grey tones of a  bleak London scene. The central character, who one assumes is  Isaacs herself, falls asleep while listening to music composed by Iraqi-Jewish musicians. In her dreams she is transported to her ancestral home in Iraq. This is a world peopled with ghosts. 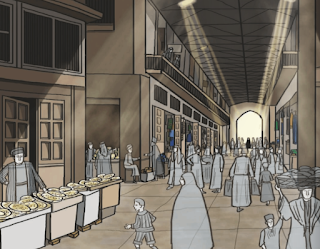 The bustling markets of Old Baghdad, as imagined by Carol Isaacs in The Wolf of Baghdad

Isaacs can almost smell the delicious aromas rising out of the cooking pots on the stove. She becomes her own grandmother  and dons the black abaya that women in Iraq were expected to wear in public. She begins to explore the world outside the home.

As the reader is led through the alleyways - so narrow they almost block out the sun - the colours become vivid.  The journey continues through the bustling markets of Old Baghdad with their carpet and copper pot sellers, huge plates of Turkish delight and sweets on display, and the amba stalls, selling mango pickle from India. Here is the Tigris river, where Jewish children first learn to swim. When the river burst its banks, for a few pennies, porters would carry young passengers  on their backs to keep their feet dry.

The narrative, interspersed with snapshots of daily life, comprises short quotes from relatives and friends collected or recorded over the  years. The drawings are based on familiar photographs of Baghdad and of family groupings in Ottoman dress.

Isaacs’ family led active social lives but also mixed with Muslims and Christians. They had servants and life was comfortable. On the flat roofs, it was customary to escape the stifling heat and sleep under the stars. We are taken on an excursion to the Great Synagogue, surrounding a huge open courtyard, and to the main school, the Alliance Israélite Universelle, which served the Jewish middle class and  where children were closeted, safe from the outside world.

There are interesting details that are easy to miss in the animation.  For instance a woman  who has lost her husband would wear the same dress for the  30-day mourning  period, until she finally casts the dress into the river. The dress makes  several haunting appearances in the book.

But the storm clouds are gathering for the community and Isaacs deftly suggests the rise of pro-Nazi feeling with her pen. Leaflets containing propaganda  flutter down as crowds make the fascist salute.

“When I returned from serving in the Iraqi army, I sensed the atmosphere had changed and that the Jewish community did not feel welcome anymore,” says Dr Heskel Isaacs, one of the author's family who appears in the story.

Scenes of fleeing and fearful families and padlocked gates contribute to a sense of foreboding and irrevocable loss. ‘In order to exit Iraq, my father had to leave the house (with everything in it) as a guarantee that we’d go back. And of course we didn’t,’ says Yvonne Hay, another Iraqi featured in the story.

The images leap forward to  the persecution of the 1960s. There are quotes from Jews imprisoned in the Kasser al Nihaya – the Palace of  No Return, and the doleful spectre of executed Jews, their bodies hanging from gibbets in Liberation Square in Baghdad in 1969. In the final part of the book  the mood darkens  as Isaacs evokes  the Farhud massacre of 1 and 2 June 1941 where almost  200 Jews – possibly hundreds more - were murdered, raped and mutilated and there was mayhem.

Rioters ransacked Jewish homes ‘to the last feather’. Isaacs gives us to understand that this was the seminal moment when the Jewish community was lost,  although it was to limp along for another ten years, until the mass airlift of ninety percent of Jews to Israel in 1950.

The wolf of the title refers to  the superstition among Iraqi Jews that a wolf is kept in a house where children die in infancy to ward off demons. Indeed, a wolf’s tooth was put in a newborn baby’s crib to keep evil spirits away and an imaginary wolf accompanies Isaacs throughout her Baghdad reverie. In the afterword,  Isaacs recalls visits to her family's London home by the family’s Muslim friends and there is also a useful timeline  and bibliography.

The wolf never manages to ward off the evil spirit of antisemitism, which is still very much alive in the Arab world. But a surprising bout of kaukokaipuu has begun to grip intellectuals in Iraq, even those who are too young to recall the  time when Jews lived amongst them. They are longing for their lost  Jewish community to return.

More about the Wolf of Baghdad
Posted by bataween at Wednesday, April 22, 2020