A new exhibition at the Bible Lands Museum on Yemenite Jews and their relations with the land of Israel has opened. Report by Aviva and Shmuel Bar-Am in the Times of Israel:

Over time, Jews living at Ein Gedi near the Dead Sea learned to produce rare cosmetics from the balsam tree that were coveted by wealthy Europeans. A small jug whose resin is thought to be from the balsam tree, dating back nearly 2,000 years and discovered near the Dead Sea, is on display at the exhibit. Museum visitors are invited to get a whiff for themselves of balsam, frankincense and myrrh.


Potsherds from the 8th to 6th centuries BCE, engraved with South Arabic writing, were discovered at several sites in Judah, evidence of commercial connections between the two countries. One shard on display is even inscribed with the word KHN which could possibly relate to the word Kohen — or priest, in Hebrew. Other artifacts at the exhibit include several Yemenite funerary steles, stone monuments to mark a grave. Engraved on the face of one that dates back to the fifth century BCE is the word Abd, the name of the deceased.


An alabaster funerary stele depicts a woman whose right hand is raised in a gesture of prayer, and whose left holds a sheaf of wheat. A third, made of limestone, is a statuette of a woman’s head, with an inscription mentioning both her name and that of her father. 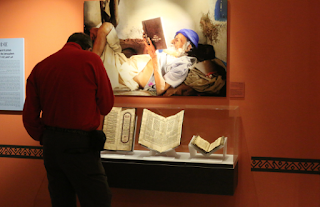 On the wall, a photo by Naftali Hilger showing a Yemenite Jew reading a book upside down

The exhibit’s statuette of twin alabaster camels dates back to the first century BCE. According to Yehuda Kaplan, our guide and one of the curators of the exhibit, the fact that they were given names points to the standing of camels as integral to the Spice Trail. Resin from the spices was so highly valued that in 26 BCE, Roman emperor Augustus tried to capture South Arabia and wrest control of the spices from its rulers. To that end, he sent an army of 10,000 soldiers, 500 Jews drafted by King Herod, and a thousand Nabateans — locals who served as middlemen in the spice trade — to help in the conquest. The Nabateans led the Roman army in circles until they ran out of food and water, and were forced to give up the attempt.

The fact that Judean soldiers accompanied the Roman army into South Arabia is the first indication we have of Jews in Yemen. Whether they remained or not is uncertain. But we do know that during the first centuries of the common era, when the Kingdom of Himyar controlled the land, Yemenite Jews did well for themselves. They even had a strong influence on the country’s rulers, for around the year 375 the royal family adopted Judaism, and so did many of their subjects. They called their god the Merciful, and sometimes, the Lord of the Jews. Yemenite Jews often expressed a longing for their homeland — and quite a few asked to be buried in the land of Israel. One burial cave in Beit Shearim in the Lower Galilee, dating back to around 250 BCE refers to “the Jews of Himyar,” and a funerary stele found southeast of the Dead Sea (today part of Jordan) notes that the deceased died in the land of the Himyarites.

Read article in full
Posted by bataween at Thursday, March 12, 2020