In the two weeks since an important delegation of Jewish leaders visited Saudi Arabia, much has happened. The kingdom has been grappling with the threat of corona virus to  Mecca; today it was announced that Prince Mohammed Bin Salman had tightened his grip on power. But the Conference of Presidents' visit deserves a mention - the first of its kind:

The heads of the Conference of Presidents of Major American Jewish Organizations said Sunday that last week’s visit by a delegation from the US Jewish umbrella group to Saudi Arabia represented a “big step forward” in the kingdom’s warming ties with Israel. 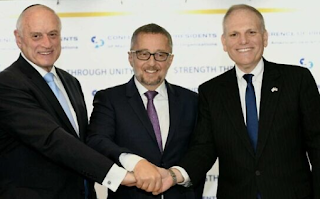 “We just came back from a very important trip to the Kingdom of Saudi Arabia. It was the first such trip we have had to the kingdom and we feel it was very productive. Very encouraging,” said Conference of Presidents chairman Arthur Stark in a press conference in Jerusalem alongside  executive vice president Malcolm Hoenlein and CEO William Daroff.

Read article in full
Posted by bataween at Saturday, March 07, 2020