Attempting to mend fences with Tunisian Jews, Tunisian president Kaies Saied paid a visit to the Al-Ghriba synagogue  on Djerba on 4 March. But his remarks separating Judaism from Zionism will not have done much to attract pilgrims to Djerba's main tourist site. The president has been  accused of antisemitism, and the recent sacking of the Jewish Tourism minister Rene Trabelsi  at the behest of a nasserist party has made matters worse. Report by the Tunisian press agency: 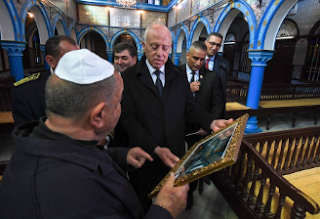 President Saied is shown around the al-Ghriba synagogue by Perez Trabelsi, head of the pilgrimage organising committee

(TAP)- President Kais Saied visited, on Wednesday, the Ghriba Synagogue in Djerba, accompanied by the Ministers of Defense, Transport and Logistics, former Minister of Tourism, René Trabelsi, as well as regional officials.

"This visit was an opportunity to evoke the historical, civilizational and cultural depth of Tunisia and the peaceful and spontaneous coexistence between its citizens of different religions", underlines a statement of the presidency of the Republic.

Visiting the Jewish neighbourhood (Hara) in Djerba, the Head of State met with representatives of the Jewish community and some local people. 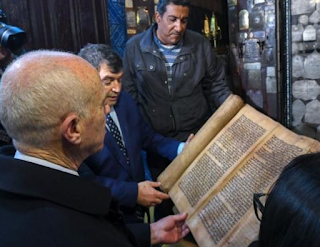 "Tunisian Jews are equal with the rest of Tunisians in the eyes of the law, especially in terms of rights and duties," Saied said, stressing that "it is not a question of speaking of a Jewish community but, fundamentally, of citizens.

In this context, the Head of State recalled the activist path of several Tunisian Jews against the French occupation. They had participated in the building of the country after independence and some of them had assumed important responsibilities of the State, he recalled.

"It is necessary to make the difference between the Jewish religion, as a heavenly religion, and the Zionist movement that deprived the Palestinian people of their land," Kais Saied insisted.

Read article in full
Posted by bataween at Friday, March 06, 2020