'The Jews are to blame for the coronavirus''

It did not take long for people in Muslim countries to blame the Jews for the coronavirus. Indeed, it  is  one of the oldest libels in the history of antisemitism: Jews are responsible for spreading the plague.  Here is its latest iteration, in Turkey and among Islamists. In Iran, a Zionist American conspiracy is being blamed. 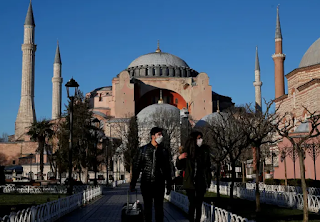 According to the Jerusalem Post, the coronavirus is a Zionist plot spread by Jews to decrease the world population, some members of Turkey's press and public have said, according to the Middle East Media Research Institute (MEMRI).

MEMRI, which specializes in translating Middle Eastern media into English, has uncovered a number of incidences of Turks blaming the coronavirus epidemic on Jews and Zionism.

In a video posted to Twitter on March 13 by IMChaber24, a minibus driver and his passengers can be heard engaging in antisemitic conspiracy theories. The driver claims that all outbreaks, from AIDS to Ebola were created by pharmaceutical companies, before asking: "And to whom do the companies belong?" A passenger suggests "the rich," but the driver immediately counters with "the Jews."

When initial reports about the virus came out of China, Salafists in Egypt, Morocco, and elsewhere dubbed it a “Soldier of God” targeting those infidels who work against him.

“The power of God strikes upon China, Communism and Buddhism: Crowded Hospitals. China declared war on Islam and Muslims and persecuted our brothers Uyghurs,” Abdul Razzak al-Mahdi, a Syrian Salafist, tweeted on Jan. 20.

“God gave them a soldier (virus). And many of God’s soldiers said, Glory be to Him … O God, increase their suffering and affliction until they stop fighting your religion and worshipers.” An Egyptian cleric celebrated that the “power of God strikes upon the Buddhist communist China. China launched a war against our Muslim Uyghur brothers and God sent his soldier [coronavirus]. God is not unjust to his worshipers.”

Videos of Islamist clerics praying for the demise of Chinese communists were common. “After China isolated more than 5 million Muslims,” one wrote on January 25, “the whole world is isolating China because of the outbreak of the coronavirus among Chinese in fear of contamination.”

The tenor of Islamist comments changed after the outbreak spread into other countries, particularly Iran. Islamic Revolutionary Guard Corps (IRGC) Major General Hossein Salami suggested that the coronavirus might be a biological weapon developed by the United States against China and Iran. Iran now is suffering one of the world’s worst coronavirus outbreaks, with a reported 853 people killed by the illness as of Monday. The actual number could be dramatically higher. Its victims include high-ranking government officials and senior clerics.

Read article in full
Posted by bataween at Wednesday, March 18, 2020