Seventy years ago, Iraqi Jews allowed to leave - but stripped of citizenship

This month marks seventy years since the Iraqi Parliament passed a law permitting Jews to emigrate legally from Iraq, on condition they forfeited their Iraqi citizenship. The majority decided to register to leave for Israel, which organised the airlift known as Operation Ezra and Nehemia.The Jewish senator Ezra Menahem Daniel made a last desperate plea in Parliament for the government to cease its discrimination against its Jewish citizens, whom the British ambassador to Iraq likened  to negroes in the American South. One year later, the Iraqi Parliament passed another law, freezing Jewish property. 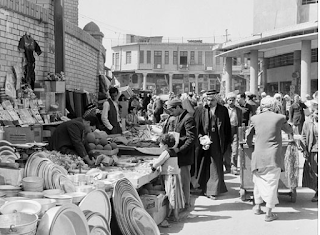 The Shorjah market in old Baghdad, once dominated by Jews

Iraq, March 1950. A pathetic scene: the last Jewish senator in the parliament makes a last stand on behalf of the Jewish community of Iraq. ( To no avail: within a year most of the 140, 000 Jews would be gone and their property confiscated. A bill was passed which allowed Jews to leave Iraq legally, on condition they forfeited their nationality.)


Norman Stillman's book The Jews of Arab Lands in Modern Times (Part 2) contains this (edited) summary by the British ambassador to Baghdad of the decisive Iraqi Parliamentary debate. The ambassador makes a startling comparison between the discriminatory treatment of the Jews in Iraq and the negroes in the American South. Contrary to revisionist accounts that they lived untroubled, harmonious lives, the Jews were repressed, jittery, and fearful of what the future might hold.

The debate in the Iraqi Senate on March 4th on the Draft Law supplementary to the Ordinance for Cancellation of Iraqi Nationality produced two speeches of some pathos from the aged Jewish Senator, Sayyid Ezra Menahem Daniel.


Senator Ezra (Daniel) said:" Doubtless the Government has brought forward this bill with reluctance in view of the painful condition in which Iraqi Jews find themselves today and in order to reduce the disturbances caused by illegal emigration. This bill deals with only one aspect of the Jewish question in Iraq. What can be done to reassure the Jews who do not wish to leave their homeland for good and who are loyal and law-abiding citizens? They are now deprived of their constitutional and legal rights as a result of administrative measures placing restrictions *on them alone of all Iraqi nationals.


They have been discriminated against, and their liberties, actions, education and means of livelihood have been handicapped. Does not the Government consider it to be its duty to reassure this large section of loyal citizens by removing those extraordinary restrictions in order to restore to Iraqi Jews their sense of security, confidence and stability? The Jews have lived in Iraq for 3,500 years. That is why they are reluctant to emigrate unless they are really obliged to do so. History will reveal the real reason for this emigration and will show that the Iraqi Jews have nothing to do with the unhappy conditions of which their fellow citizens complain."


Later in the debate the Senator spoke again saying he did not know what the Jew could do in Iraq after he had submitted to the exceptional conditions of the past two years. He had not been admitted to the Higher Colleges and was not allowed to study at his own expense abroad. Work was denied him and he suffered restrictions in business. But for these severe handicaps, Iraqi Jews would not have gone so far as to attempt large-scale flight from the country.


The Senator added that if the Government wanted to reassure the Jews and induce them to resume their ordinary avocations it should remove these handicaps and encourage them to work.


The Minister of the Interior, Sayyid Saleh Jabr, said in reply that the government was sympathetic with loyal citizens who did not put themselves in an attitude of opposition to the national interest. A not inconsiderable section of Jewish nationals, however, had committed acts which were not consistent with the country's interests and were in fact a disservice to the nation.Their motivation might have been political or religious. The Minister continued that the Government felt it was not in the national interest to prevent the emigration of these people to any destination they might choose...."


The British Ambassador to Baghdad adds: " It may be worthwhile to attempt to provide a more convincing answer to Senator Ezra Daniel's questions than did the Minister of the Interior. As I have already reported , the PM has told me there are now no administrative restrictions applied to Jews which do not apply to all other Iraqi citizens. I have no reason to believe this is untrue. Nevertheless, discrimination against Jews is applied in practice. In the Southern States of America, it is said to be difficult for a negro to obtain his rights against a white American in the Courts or to send his son to study alongside his white fellow citizen in higher colleges. An Iraqi Jew today suffers similar disabilities, which extends to many aspects of his life. Most educated Iraqis deplore this state of affairs,and the Iraqi governing class is increasingly perturbed by the stagnation which has been caused in the markets by the uncertainty with which the Jews regard their economic future.


Governments in Iraq, however, are too weak to lead public opinion in a matter of this kind, and any direct attempts on their part to improve the position of Jews are immediately the object of Nationalist attack. I think the Iraqi government sincerely hoped that the departure of the Jewish malcontents under this new Ordnance would improve the atmosphere and facilitate good treatment for those who remained. Like many well-intentioned Iraqi measures its effects have been different from those intended. It has resulted in an increase in attacks by the Nationalist press on the Iraqi-Jewish community as such..."

* as recorded by Nissim Rejwan in his book The last Jews of Baghdad.