Report of proposed seizure of Borgel cemetery in Tunis is denied

A report that the Tunisian government intends to expropriate the Borgel Cemetery in Tunis and sell it to property developers has been denied by a Tunisian-Jewish leader in France. 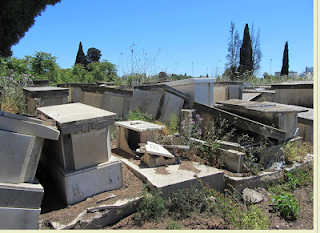 Jean-Pierre Allali, who is a member of CRIF, the body representing French Jews, has denied a report by Ftouh Souhail, a journalist who campaigns for the interests of Tunisian Jews. Souhail claims that the Tunisian government aims to resurrect a plan to sequestrate the cemetery, which dates back to 1893 and is worth 35 million Euros.

Alllali, who is  close to the AICJT, the association aiming to preserve the Borgel, claims that they have no information to say that the Tunisian government is thinking of expropriating the cemetery.
According to Allali, Souhail did not consult the AICJT when he wrote his article.

The AICJT is aiming to raise funds to clean and maintain the cemetery, which numbers 22,000 graves, including 183 rabbis and a monument to the Jews who died during the Nazi occupation of Tunisia in WWII.

Souhail writes that neither the French consulate, nor the tiny Jewish community can prevent an expropriation taking place. The French Consistoire, which looks after religious needs,   might be able to postpone redevelopment and get some of the graves exhumed.  While the motive here is urban development, there has been a worrying rise in antisemitic feeling in Tunisia in recent months.

More about the Borgel cemetery