Myths and facts about the 'Right of Return'

Arab leaders falsely point to UN Resolution 194 as proof that Arab refugees have a Right of Return, but what about the forgotten Jewish refugees? Eli Hertz in Myths and Facts takes a long look at what the Resolution does and doesn't mean (with thanks: Michelle):


Resolution 194, adopted by the UN General Assembly on December 11, 1948, addressed a host of issues, but only one paragraph out of 15 dealt with refugees created by the conflict. Resolution 194 attempted to create the tools required to reach a truce in the region. It established a conciliation commission with representatives from the United States, France and Turkey to replace the UN mediator. The commission was charged with achieving “a final settlement of all questions between … governments and authorities concerned.” The Resolution’s “refugee clause” is not a standalone item, as the Arabs would have us think, nor does it pertain specifically to Palestinian Arab refugees.

Of the 15 paragraphs, the first six sections addressed ways to achieve a truce; the next four paragraphs addressed the ways that Jerusalem and surrounding villages and towns should be demilitarized, and how an international zone or jurisdiction would be created in and around Jerusalem. The resolution also called on all parties to protect and allow free access to holy places, including religious buildings. 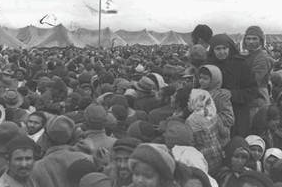 Jewish refugees in an Israeli transit camps in 1950


One paragraph has drawn the most attention: Paragraph 11, which alone addressed the issue of refugees and compensation for those whose property was lost or damaged. Contrary to Arab claims, it did not guarantee a Right of Return and certainly did not guarantee an unconditional Right of Return – that is the right of Palestinian Arab refugees to return to Israel. Nor did it specifically mention Arab refugees, thereby indicating that the resolution was aimed at all refugees, both Jewish and Arab. Instead, Resolution 194 recommended that refugees be allowed to return to their homeland if they met two important conditions: 1. That they be willing to live in peace with their neighbors. 2. That the return takes place “at the earliest practicable date.”


The resolution also recommended that for those who did not wish to return, “Compensation should be paid for the property … and for loss of or damage to property” by the “governments or authorities responsible.”


Although Arab leaders point to Resolution 194 as proof that Arab refugees have a right of return or be compensated, it is important to note that the Arab States: Egypt, Iraq, Lebanon, Saudi Arabia, Syria, and Yemen voted against Resolution 194. Israel is not even mentioned in the resolution. The fact that plural wording also is used – “governments or authorities” – suggests that, contrary to Arab claims, the burden of compensation does not fall solely upon one side of the conflict. Because seven Arab armies invaded Israel, Israel was not responsible for creating the refugee problem. When hundreds of thousands of Arab Jews, under threat of death, attack and other forms of persecution, were forced to flee Arab communities, the State of Israel absorbed the overwhelming majority of them into the then-fledgling nation.

The Forgotten Jewish Refugees: For a host of reasons – practical to parochial – Israel has failed to raise the issue of the mammoth injustice done to almost a million Jews from Arab countries. The scale and premeditated state-sponsored nature of persecution that prompted the 1948 flight of close to 900,000 Jews from their homes has only recently begun to emerge. Arab publicists have sought to detach entirely the flight of Jews from Arab lands from the Arab-Israeli conflict, claiming they are two separate phenomena, and that Israelis should take up the issue with each respective Arab state that was involved, not with the Palestinian Arabs.


Clearly this is an attempt to rewrite history. One only needs to reexamine the almost prophetic article in The New York Times two days after Israel declared independence ("Jews in Grave Danger in all Moslem Lands") to confirm the tie. The New York Times reported on May 16, 1948:

"For nearly four months, the United Nations has had before it, an appeal for ‘immediate and urgent’ consideration of the case of the Jewish populations in Arab and Moslem countries stretching from Morocco to India."


The New York Times country-by-country table estimated the Jewish population-at-risk as 899,000 people. The article cited the dismissal of Jews in the civil service in Syria, per capita ransom payment of $20,000 by Iraqi Jews seeking to leave Iraq, a forced levy on the Lebanese Jewish community to support the Arab war effort parallel to incitement and physical attacks on Jews, and Jews fleeing to India from Afghanistan. It quoted the UN Economic and Social Council report as saying:

"The very survival of the Jewish communities in certain Arab and Moslem countries is in serious danger, unless preventive action is taken without delay."


Hostility and oppression only grew, ultimately leading to the exodus of almost all Jews from all Arab and Moslem countries from Casablanca to Karachi.

At last, Trump grapples with refugees
Posted by bataween at Wednesday, March 11, 2020