Mizrahim, the backbone of Likud's support

This New York Times article by David Halbfinger spotlights Benjamin Netanyahu's key Mizrahi constituency. But it ignores the Mizrahi attachment to patriotism and tradition (well explained in this interview with academic Nissim Mizrahi), and fails to identify a key motive behind their support for Likud: mistrust of Israel's Arab neighbours, who caused the exodus of their parents and grandparents. 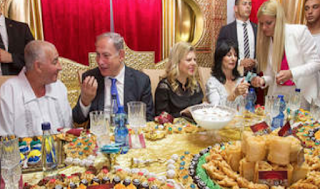 Mr. Netanyahu failed to win an outright majority, leaving Israel’s political standoff unresolved until he or another candidate can build a governing coalition, a process that seemingly could last indefinitely. But the Likud voters came out in droves.


In cities in central Israel like Rishon Letzion, blue-collar and middle-class police officers, contractors and government workers who had dallied with other parties over pocketbook issues came home to Likud in Mr. Netanyahu’s hour of need.


They turned out in cities like Beersheba, in the south, and in a string of rural northern towns where Mr. Netanyahu had gone hunting votes “from neighborhood to neighborhood, from street to street,” as he said in his victory speech. These Likud strongholds are replete with so-called Mizrahi Jews, whose parents and grandparents immigrated to Israel at midcentury from countries like Morocco, Egypt, Libya and Iraq.


Mizrahim — the name is Hebrew for eastern, or Oriental, Jews — have been a crucial pillar of the Likud party since its formation in the 1970s, when Menachem Begin galvanized them as a political force that drove the party’s rise to power. Having fled or been expelled from Arab countries, many readily took to the party’s hard line against Israel’s Arab adversaries and its embrace of Jewish nationalism.


Progressive Israelis have been baffled for years by the Mizrahi allegiance to Likud when liberal politicians promise earnestly to address the social inequities and economic inequality that have disadvantaged the Mizrahim. But many Mizrahim credit Likud for their advancement: Its local centers serve as social hubs and hiring halls. The party’s push to expand settlements in occupied territory has improved the lives of many working-class Mizrahim who moved into subsidized homes in the West Bank.

Netanyahu has made himself one with the Mizrahim, championing their causes and nursing their grievances. He has elevated Mizrahi lawmakers to prominent posts, including some who are lightning rods for the left, like his culture minister, Miri Regev, best known for crusading against artists she sees as anti-Israel. “When they attack her, it just makes the base stronger,” Ms. Amiran, the columnist, said.

For many younger Mizrahim, Mr. Netanyahu, who has been prime minister for a decade, most of their adult lives, is not only Likud, he is a towering figure in the great Jewish narrative, a latter-day king of Israel. Prof. Nissim Mizrachi, a Tel Aviv scholar of Iraqi descent, said that many experts made the mistake of treating Mizrahi voters as a minority.


“Just like white people in rural America feel that they’re the real Americans, Mizrahim don’t feel like a minority group,” Professor Mizrachi said. “They feel like the Jewish people. And Bibi, for them, is their safeguard.” They also account for upward of 40 percent of the population, though their families have become so blended that government demographers have given up trying to count them. But identity dies hard. The Mizrahim remember well the harsh assimilation of their parents and grandparents at the hands of the Ashkenazi elite, the European-born Jews and their descendants who founded and led the state of Israel through its early decades. Generally poorer and less educated, thousands of Mizrahim suffered bigotry, discrimination and abuse in health care, housing, education, employment, and even army service, historians and activists say.


While Ashkenazi children were encouraged to go to college, experts say, Mizrahi children were steered into vocational schools. While Ashkenazi immigrants were settled in the heart of Israel, Mizrahim were shunted to slum-like peripheral “development towns.” Those resentments have not cooled with time. Many still mourn relatives who were kidnapped as infants and secretly given away for adoption, or died of cancer after being irradiated to treat ringworm upon arrival in Israel. Mr. Netanyahu, a scion of Ashkenazi elite himself, has played to those resentments, attacking as illegitimate the media and legal establishments, powerful sectors of Israeli society considered bastions of Ashkenazi power. Where the Ashkenazi see checks and balances, Mr. Netanyahu’s base sees the deep state.


“When you attack Bibi, it just makes the base support him,” said Revital Amiran, a political columnist. “They just feel they have to protect him.”

“The tension is between democracy as Mizrahim view it, and liberalism, the deep state,” Professor Mizrachi said. “The Blue and White people” — Mr. Gantz’s party — “basically want to undermine their position by using the institutions of the deep state. They have control over the media, the legal system. But the Mizrahim can win the election. And they felt like it was an emergency.”

Homes in the settlements are not exactly subsidized. However, the real estate is cheaper so the homes are cheaper. But people who move in have to buy the homes from a builder or developer.
Now if someone talks of infrastructure development costs as a subsidy, then let's point out that there are infrastructure costs for new towns and new neighborhoods on both sides of the Green Line. And the govt covers them on both sides, AFAIK. Just by the way, a lot of money was poured into kibbutzim that were not profitable or that lost money for one reason or another.