With thanks: Kobi Arami at  Jews of Iraq (Jews of Babylon)

The decoration in the burial chamber of  the shrine of Ezekiel is intact at al-Kifl, Iraq. But the  tomb of Ezekiel itself is being enclosed in a large wooden structure. 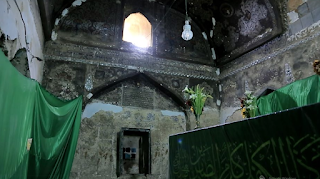 Contrary to reports, photos taken one month ago show that the  Hebrew inscriptions  and original floral decoration have not been removed. However, a large latticework structure will prevent pilgrims from approaching or touching the tomb itself. The photos show an imam directing a group of workmen to erect the structure. 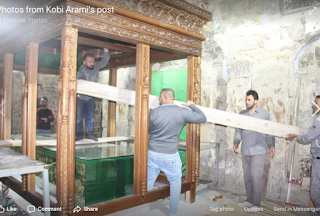 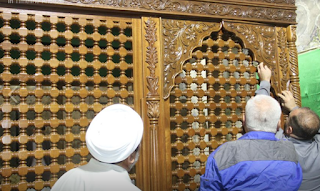 All photos courtesy Jews of Iraq (Jews of Babylon)

Within the last ten years, the shrine was transformed into a Shi'a mosque which dwarfs the original site, owned by the Daniel family. The shrine at the centre is said to be that of Dhu al-Kifl, a minor prophet  mentioned in the Koran, but wall hangings emphasise the Imam Ali, the most important figure in Shi'a Islam.

Before the flight of the Jews of Iraq in the 1950s, the shrine of Ezekiel was the most popular of Jewish holy sites, drawing some 5,000 pilgrims for the festival of Shavu'oth. The ministry of heritage and tourism wanted to restore the original character of the site in order to attract tourists. However, the Wakf, with funding from Iran, prevailed and undertook the major redevelopment of the site.

More about the shrine of Ezekiel
Posted by bataween at Friday, March 13, 2020