While the coronavirus crisis has for many brought about a sense of solidarity in adversity, there have been distressing instances of racism in Israel, such as the odd attack against Asian Jews. +972 magazine *reports: 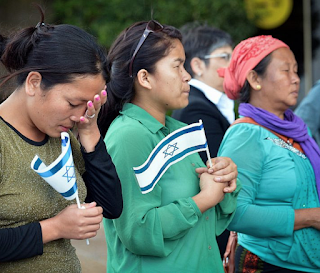 Last Saturday, Am Shalem Singson, a 28-year-old yeshiva student, was walking toward downtown Tiberias with some friends when two Israeli men scrunched up their nose and called them “corona, corona.”

Singson told them that he wasn’t even from China, but India — he and his friends are Bnei Menashe, a community of Indian Jews, several thousand of whom live in Israel. But the men, angry at being questioned, first shoved, then repeatedly kicked him. Singson had to undergo surgery for severe injuries to his chest and lungs.

Singson, who is still recovering in the hospital, believes that the novel coronavirus pandemic has become a catalyst for racists to escalate their bigotry. “They don’t want to live with us, they just want to fight,” he says. “They take advantage [of the situation] using coronavirus…and it’s not just me, many people face this.”

The story was also reported in the Times of Israel and the Jerusalem Post
Posted by bataween at Monday, March 23, 2020

Chances are the "Israeli men" who attacked him are Mizrahim

I'm surprised this blog would actually use an article from 972 magazine. 972 is just one of the most anti-semitic news sites out there. (I can provide you with a whole list of others.) It makes the New York times or the guardian seem like they're run by orthodox rabbis. And in case anyone was wondering - no. I don't believe a word of this article.

Davsil - The story was reported in other media