How the image of the Jew has changed in Egyptian cinema

Sariel Birnbaum has written this fascinating overview of the portrayal of Jews in Egyptian cinema in Middle East Quarterly. Antisemitic characters and tropes had their heyday in the 1950s and 60s, but seem to have abated in contemporary cinema. (With thanks: Flor, Boruch) 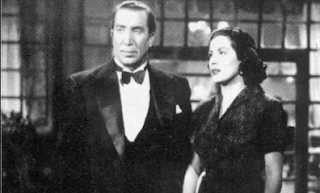 The Jewish star Leila Mourad and Yussef Wahbi in the film Ghazel El Banat.
Sira al-Gababra (The Giants' Struggle),[21] which depicts the oppression of Middle Eastern and North African Jews by European Jews in Israel, is unique in Egyptian films portraying Israelis. In this movie, Ashkenazi Jews actually enslave their Mizrahi brothers upon their arrival in Israel.

The Mizrahi Jews are portrayed as both victims and negative characters, such as an Egyptian-Jewish seductive dancer named Lillian, clad in extremely immodest clothing to suggest lewdness. Lillian encounters grim repression after emigrating to Israel, so she helps Egyptian prisoners break out of an Israeli jail and hands over Israeli military secrets to Egyptian soldiers but never returns to Egypt as she is killed in a battle against Israeli soldiers.

The Nasserist regime, it appears, would not show its subjects an image of a "loyal Egyptian Jew" at a time when it was pointing Egyptian Jews toward the exits. Anti-Semitic narratives generally portray Jewish men as rapists and women as seductresses.

During World War II, however, the backstabbing Jewish character Süß appeared in Veit Harlan's 1940 Nazi film Jud Süß. German propaganda minister Joseph Goebbels needed to justify the "cleansing" of Jews from German cities and their removal from the vicinity of Aryan women in particular.[22]

Therefore, the "arch villain" for the Nazi propaganda was the Jewish male and rapist Süß.   In Egypt, on the other hand, since the heroic protagonist in the fight against Israelis the Egyptian soldier, the enemy is feminine, the seductive Jewish woman, tempting him away from his family and mission, demonstrating that Jews fight with conspiracies and guile.

Read article in full
Posted by bataween at Monday, March 02, 2020