Gaza in a bygone age of Jewish-Arab cooperation 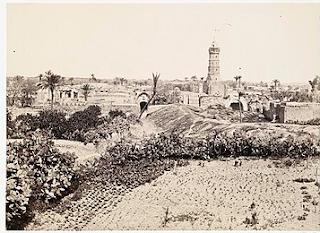 Who would believe that only 110 years ago, then Chief Rabbi of Gaza Nissim Binyamin Ohana, and then mufti of Gaza Sheikh Abdullah al-Alami, co-authored a book?

"In Gaza," Ohana wrote in one of his essays, "I wrote a book, Know What the Heretic Will Say in Response with the mufti of Gaza, Sheikh Abdullah, who would visit my home twice a week because he wanted to know the exact meaning of the verses copied from the Old Testament into the New Testament by the apostles."

Ohana also wrote that he initiated the construction of a mikveh (ritual bath) for women in the city, as well as a project to purchase ground for a Jewish cemetery after he saw how the dead of Gaza were transported to Hebron for burial on the backs of donkeys.

The children of Gaza – Jews and Arabs – liked to wear daggers embellished with locally produced beads. On Muslim holidays, Avraham Elkayam would take part in horseback and wrestling competitions. "We purposely lost to the Bedouin, lest they be offended," the Jews of Gaza would later recall.

In September 1910, the newsletter "HaPoel HaTzair" reported that "relations between Arabs and Jews are very good, and no Jew has ever suffered in Gaza for being a Jew."In 1914, Zvi Hirschfeld, the founder of the Ruhama moshava in the western Negev, wrote in his diary that "On Tu BiShvat the children from the Gaza school had an excursion on our land and planted trees and ate the fruits of the land and celebrated the New Year for trees in a befitting manner, with songs and poetry."

More about Jewish Gaza
Posted by bataween at Sunday, March 29, 2020