In this profile of two young Australian Jews 'returning' to Egypt for the re-opening of the Eliyahu Hanavi synagogue in Alexandria,  BBC Arabic seems to have taken on the role of promoting Egypt's tourism industry. In a trend noted here and here, it misleads on the ethnic cleansing of Jews whose numbers have reduced from 80 -100,000 to fewer than 10, and vaguely blames 'wars and politics'.  In fact,  Egyptian Jews were victims of state-sanctioned antisemitism. (With thanks: Tarek)

Egypt is now witnessing what may appear in the eyes of some to a change in the nature of the relationship between the Jews and Egypt, in which tens of thousands of them lived in the first half of the twentieth century before politics and wars interfered and spoiled their lives. 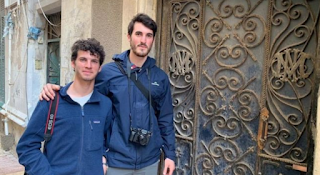 Alex and Jack March, following in the footsteps of their grandfather

This change prompted the numbers of Egyptian Jews who left nearly 70 years ago and their families to return - albeit at least to visit - the motherland.

Among them are descendants of Egyptian Jews visiting Egypt for the first time. The two Australian brothers, Alex and Jack, went to Egypt for the first time early this year to visit the home of their Egyptian Jewish grandfather, Nissim March, whose family left the country and left after the flare-up of the Arab-Israeli conflict in 1948 and none of them ever returned since then.

The March brothers say that they have long heard about Egypt and about Alexandria, in which their grandfather founded a house whose name is still engraved on it until now. Therefore, the visit was postponed until the opening of the "Eliyahu Hanabi" temple on Prophet Daniel Street in central Alexandria after the restoration.