At least two Jews have died in Iran from coronavirus

One of the worst outbreaks of the corona virus has occurred in Iran.  Unconfirmed reports say at least 15 members of the ruling Islamic regime have died. Now the virus is taking its toll on the 8,000-member Jewish community, The Jerusalem Post reports: 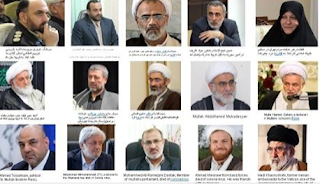 Some of the members of the ruling regime said to have died from coronavirus (Photo montage: K Melamed)

These are the first two deaths in Iran's Jewish community that were officially reported since the virus first broke out in the Islamic Republic. According to the source, "it remains unclear whether it will be possible to bring [the two] to a proper Jewish burial."