The story of Iraq's Jews told in an animated book

It began as an animated movie; now it's a book. The Wolf of Baghdad is a collection of cartoons illustrating the story of Carol Isaacs' family and community - the Jews of Iraq. Jennifer Lipman interviews Carol in the Jewish Chronicle (with thanks: Sami) 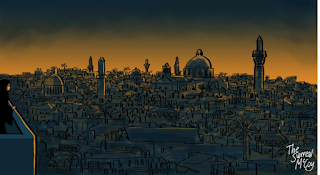 How do you draw something you’ve never seen? How can you bring to life a world you were never part of? Those were the questions facing cartoonist Carol Isaacs as she embarked on her graphic novel, a tribute to the home her parents fled before she was born,

The Wolf of Baghdad, which follows that city’s Jews from the turn of the last century to the brutal Farhud pogrom of 1941 and their eventual departure, is a beautiful, startling piece of work, and a valuable contribution to the literature on the experiences of Jews in Arab lands.

The novel shows, for example, the Jewish family matriarch wearing the abbaya, the full body cloak worn by Iraqi women in public in the early 20th century. There are scenes from the souk and in the Jewish Quarter, of children sleeping on roofs during sultry summer nights or swimming in the Tigris, along with heartrending images portraying the terror as anti-Jewish prejudice closed in.

It’s a portrait of a disappeared world. Isaacs undertook exhaustive research to ensure her illustrated Baghdad reflected the one her family knew. She spoke to many relatives, in some cases relying on testimony recorded decades earlier, including that of her father.

“We had hardly any photographs, as you didn’t bring many out, and none showing where people lived,” she explains, “I found this wonderful book on Jewish houses in Baghdad; I tracked it down to a second-hand store in Jerusalem, to see how the houses actually looked, because they were quite specifically built to certain designs.”

Much of what she was drawing no longer exists. “The Jewish Quarter is in terrible disrepair, all the old houses are just crumbling, We have an address for my late mother’s house by the river, but it’s no longer there. There’s nothing even in terms of tombstones.”

The Wolf of Baghdad, with accompaniment by the band 3yin, will be performed at JW3 on 5 March 2020.

More about Carol Isaacs
Posted by bataween at Wednesday, February 12, 2020