The Nazi Islamists, and how the Mufti dragged the Arabs into war

It is a sign of the times - and its enmity for Iran -  that Saudi Arabia, once friendly with the Muslim Brotherhood -  is now spotlighting the links between the Nazis and the Islamist MB  in order to distance itself from the Palestinian cause, itself led by the pro-Nazi  Palestinian Mufti of Jerusalem. Writing in the Jerusalem Post, Khaled Abu Toameh comments on an article in the Saudi newsmedium Okaz (with thanks: Lily):

Haj Amin Husseini, who was appointed by the British High Commissioner as Mufti of Jerusalem during the British Mandate for Palestine, was the link for managing the recruitment of Arab fighters to the Nazi army, the Saudi newspaper Okaz reported in an article published on Friday. 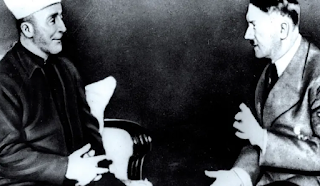 The Mufti meeting Hitler in 1941

Relations between Saudi Arabia and Hamas, an offshoot of Muslim Brotherhood, have been strained in the past few years. Last year Hamas accused the Saudi authorities of arresting several of its prominent figures and members in the kingdom. Husseini, who was the representative of the Muslim Brotherhood in Palestine, contributed with his friend and leader Hassan al-Banna, the founder of Muslim Brotherhood, to recruiting a Muslim Brotherhood army of Egyptians and Arabs, gathered from orphanages and poor rural areas, to work under the Nazi army led by Adolf Hitler,” the newspaper said in an article written by its assistant editor-in-chief, Khalid Tashkandi.

According to Tashkandi, the number of Arabs recruited by Husseini and Muslim Brotherhood was estimated at 55,000, including 15,000 Egyptians. The Saudi editor said there were a number of reasons why the Nazis were interested in Islam.

“On the one hand, the Nazis were aware that the oppression of Muslims in a number of Islamic areas under occupation and colonial powers would facilitate the recruitment,” he said. “On the other hand, the Nazis saw the Muslims as stiff fighters ready to sacrifice their lives for the sake of their faith.”

This article by Mattias Kunzel, asking why a Palestinian state was not founded at the same time as Israel,  demonstrates how the Palestinian Mufti, crushing his opponents and defying the best interests of his people, dragged the Arab League states into declaring war against the Jewish state in 1948. The Palestinian leadership  must therefore be held accountable  for the ramifications and consequences of this war.

The Arab leaders rejected the partition decision, at least in public. However, the question of whether the UN decision should be crushed using regular armies remained controversial to the end.

While Amin el-Husseini, the Mufti of Jerusalem and the allied Egyptian Muslim Brotherhood, campaigned for militant jihad against the Jews in Palestine, Egypt and Saudi Arabia still refused military intervention in December 1947. The Arab League followed this stance in the same month.

It agreed to establish recruitment centers for guerrilla volunteers in Palestine. However, it viewed "the struggles in Palestine as a civil war, which it would only intervene in with  regular forces if foreign armies attacked the country and enforced partition by force," Abd al-Rahman Azzam, secretary general, declared in  February1948.

There were several good reasons to shy away from a Palestine war: First, the United Nations decision was unusually well founded. In April 1947, for example, a debate over Palestine in the UN plenary for several weeks had begun. On May 14, the penultimate day, Andrej Gromyko, the then Soviet UN delegate and later foreign minister, campaigned for the partition  of Palestine. (...)

One reason was that in 1947 tens of thousands of them had found work in Jewish-dominated economic sectors, such as the citrus fields. Secondly, the military strength of the Zionists was known. "Most Palestinian Arabs," noted Ben Gurion in February 1948, "refused and still refuse to be drawn into the war." In his study  Army of Shadows, Hillel Cohen provides examples of the tenacity with which Palestinian Arabs oppose their leaders' calls for war and make non-aggression pacts with the Jews around them, or even support Jewish defences.

But why did the war, which was so devastating for both sides, take place anyway? Why did the most radical one, Haj Amin el-Husseini's, prevail at a time when various answers to the partition decision still seemed possible? The die was cast in June 1946. That month, el-Husseini, who had been in French custody since May 1945 and was supposed to be a war criminal, arrived in Cairo. At the same time, the Arab League met in the Syrian resort of Bludan. There  it made a grave decision: The Arab representative bodies in Palestine that had existed up to that point were quickly dissolved and replaced by a new Arab Higher Committee headed by Amin el-Husseini.

Opponents of the Mufti, who had previously organized under the name Arab Supreme Front , were denied participation in the Arab Higher Committee. "The Bludan 'dictation' was a complete victory for the Mufti," emphasizes the Mufti biographer Joseph Schechtman. David Thomas Schiller speaks of "a takeover, a coup d'état".

Although Amin al-Husseini was not even allowed to enter Palestine on instructions from the Egyptian authorities, this league decision enthroned him as the new leader of the Palestinian Arabs and gave him access to a £ 10,000 annual budget. This transfer of power had consequences for the Jews: the leadership of the Mufti was like a declaration of war against  the Yishuv - the community of Jews in Palestine.

Al-Husseini's alliance with Hitler and his active participation in the Holocaust were well known. It also had ramifications for the Arabs: By its decision (to go to war), the Arab League had destroyed any approach to Palestinian politics that was independent of the Mufti. This is how countless Arabs experienced a déjà vu between 1946 and 1948: As in the period between 1936 and 1939, the Mufti once again established a terror regime against dissenters. Whoever wanted to grant the Jews rights or otherwise deviate from the doctrines of the Mufti stood with one foot  in the grave.

"the pro-Nazi Palestinian Mufti of Jerusalem"

He was not merely pro-nazi. He was an active collaborator in the German war effort and in the Shoah. See links below:
http://ziontruth.blogspot.com/2011/11/seventy-years-since-arab-mufti-haj-amin.html