The Eliyahu Hanavi synagogue in Alexandria had not witnessed a Shabbat like it for forty years, as 180 Jews from all over the world held a service on 17 February 2020. They sat in their fathers' seats, prayed, sang and danced. They hoped that the restoration  of the synagogue by the al-Sissi government will herald a new beginning in relations between Egypt and the Jewish people. But their joy was tempered by the fact that Egypt still holds the communal registers hostage.
Here is a news round-up put together by Point of No Return (with thanks to all those who contacted us):

The Times of Israel (JTA) reports:

Under heavy security — one participant quipped that there were more police than participants — the delegation entered the large synagogue compound on Friday afternoon, where, with prayer and song, they rededicated the prayer hall through affixing a new mezuza to the main door. Inside the synagogue, individuals lit memorial candles for deceased family members, which was followed by the traditional Sephardic custom of Friday evening Sabbath services. (The Jewish Sabbath runs from sundown Friday until an hour after sundown on Saturday.) 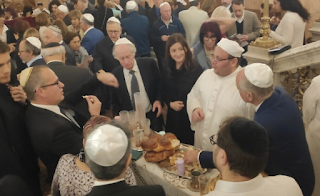 There were two rabbis at the service, Rabbi Andrew Baker and the son of the final Alexandrian rabbi, Rabbi Yosef Nefussi. (There was also Rabbi Abraham Niño Dayan - ed) Additionally, the service was joined by the US Ambassador to Egypt Jonathan Cohen and the former Israeli ambassador David Govrin, as well as other local cultural attaches. On Friday night, with wine and braided Shabbat challah brought from Israel, the Eliyahu Hanavi congregation recited the traditional blessings as a community, and broke bread before heading to a festive meal. They regathered the next morning for more prayer and Torah reading.

The highlight of the day was when 12 of the synagogue’s circa 60-70 Torah scrolls were taken out and festively paraded throughout the hall. “It was certainly a very emotional and poignant moment,” said (Alec) Nacamuli of the Nebi Daniel Association. “The 12 Torah scrolls were in honour of the 12 tribes of Israel,” said Levana Zamir, the head of the International Association of Jews from Egypt. 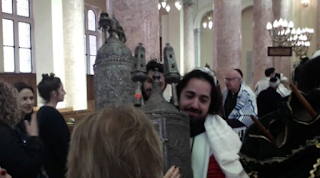 Cairo-born Zamir arrived with a contingent of some 20 Jews from Israel, along with her daughter and two grandchildren. The scrolls, she said, had been stored for decades, unused for ritual purposes by the ever-dwindling community. Their use, along with the rededication of the synagogue, made her “very, very glad,” she said. “I never imagined I would see my grandson here, holding a Sefer Torah, with the tallit [prayer shawl] on his shoulder. I cried, of course, there is so much emotion. It was just like seeing my father there,” said Zamir. 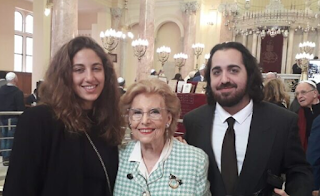 Levana Zamir with her two grandchildren, Kochav and Keisar.

But even amid the afterglow of the celebratory weekend, the expat Egyptians told The Times of Israel that their community registers — generations of annals of births, deaths, and marriages — are essentially being held hostage by the same government that sponsored the synagogue’s restoration. Under the Ottoman Empire’s Millet system, all lifecycle events were recorded through the local community’s central rabbinate. (Israel’s chief rabbinate is a direct descendent of this system.) In major hubs Alexandria and Cairo, the registers date back to the 1830s.

Three years ago, they were all taken to the Egyptian National Archives where, according to Nacamuli, nobody can gain access to them. According to the Nebi Daniel Association, none of the communal documents pertain to personal property, but they are nonetheless invaluable for the continuation of Jewish life. “In religious matters they are often the only proof of Jewish identity to enter into a Jewish marriage, determine Jewish lineage or be granted a Jewish burial, especially in the Diaspora,” reads the Nebi Daniel website. “In civil matters, they are used to establish civil identity related to nationality, marriage, divorce, etc,” it continues. And, “for historical and genealogical research, the Registers constitute a rare collection covering 150 years of the history of a thriving Jewish community.”

The Nebi Daniel Association is working to obtain digital copies of these documents, said Nacamuli, and is now considering its next steps. “We’ve been working on it for 15 years, and I can honestly say we’ve been treading sand,” he said.

Zamir is hopeful for incremental slow change under Egyptian President Abdel Fattah el-Sissi and compared him to assassinated peacemaker president Anwar Sadat. Under president Hosni Mubarak, she said, almost all memory of the Jewish community was wiped out and a generation of Egyptians in their 20s and 30s now have no idea of the flourishing Jewish community that helped build their country.

“A-Sissi is like Sadat, he will succeed [in normalizing relations],” said Zamir. “He is doing it slowly and has very good relations with the Israeli government,” she said, adding that the Egyptian people are not yet ready to embrace Israel. Relations between Israel and Egypt are still far from normal, as illustrated by the fact that out of the 40 Israelis who applied for visas, only 15 were granted. Most other western nations can purchase visas at the border. 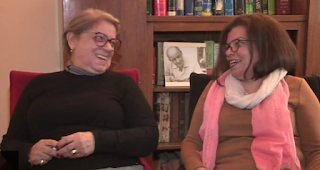 This item, An unlikely friendship, on the BBC website demonstrates a Jew and a Palestinian coming together to save Egypt's Jewish heritage. What the BBC does not say is that Marwa is married to Sami Ibrahim, whose father Albert Arie is one of the last Jews of Egypt. Marwa is not a random Palestinian but is bound to the remnant Jewish community by ties of marriage. 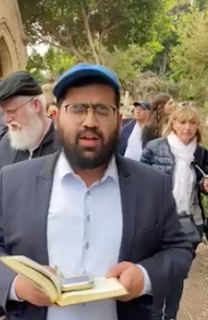 On the Friday, prayers were held at the Jewish cemeteries in Alexandria. 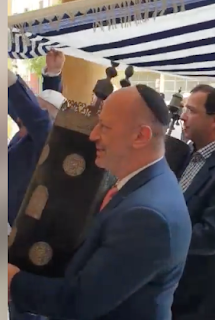 The re-dedication ceremony began with a procession of sifrei torah carried into the synagogue. Above: Edwin Shuker of the British Board of Deputies carrying one.

Click here to see video of Levana Zamir, president  of the association of Jews from Egypt in Israel. During the re-dedication ceremony Levana was asked to thank President el-Sisi for allowing the restoration of this 2000-year-old synagogue  on behalf of the Israeli Mission of Jews from Egypt. She added a special blessing for the state of Israel. The emotion of the occasion was such that Levana burst into tears, and the congregation of 180 Jews from Egypt from all over the world cried with her.