Seventy years since the immigration, an Iraqi Jew remembers

The 70th anniversary of the great airlift from Iraq is an occasion for Baruch Meiri, writing in Y-Net News, to reminisce about his arrival in Israel. His family went through name changes and several addresses, including a tent, but managed to fulfil their dreams through their children. 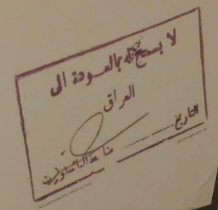 The 'No Return' stamp on Baruch's parents' passport

My family and I were part of the immigration from Iraq, which now marks its 70 th anniversary. Today it is 70 years since my parents' passport was stamped at Baghdad airport: لن يُسمح لك بالعودة إلى العراق.Meaning:  not allowed to return to Iraq. 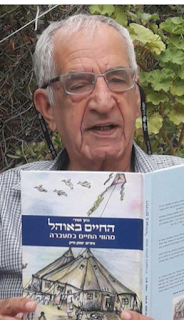 Baruch Meiri reading about life in a tent camp

This gave us, officially, the approval we had been expecting for 2, 500 years for a Homecoming. Among the three children listed on the Iraqi "passport", was my name, Farouk. I was about 10 years old. Approximately. Because almost none of us, among the 130,000 immigrants who arrived from Iraq in the early days of the State of Israel, had a birth certificate. Certainly enough reason not to celebrate birthdays.

We were the third group in my family, numbering 11 people, who proudly bore our last name, Saig, a testament to Father Yehuda's occupation, the jewelry trade. And suddenly we found out here in Israel that we were in fact three separate families: the first group who immigrated to Israel, and numbered four brothers and sisters, kept the 'Iraqi' surname Saig. My brother Moshe, a member of the Zionist underground of Iraqi Jews, who was credited with the Bezeq trial in Baghdad and who immigrated the next day, came to Israel. The agency official at the Israeli airport decided to give him the surname "Meir". Maybe after his grandfather? The agency official did not explain.

We, the last five survivors of our family of the Babylonian exile were given a rather strange new name: Isaac.

Not only were we given a different last name at Lod Airport (today Ben Gurion Airport), but many of our first names were changed too. Of course, the Jewish Agency clerk didn't even bother to get our consent. My brother Salim became Moshe; Brother Fuad Lavner; sister Shoshana, while the younger sister Puriel was given the name Hope (Tikva).

It is worth noting that many of the girls who immigrated from Iraq were given the names Shoshana and Tikva. Sometimes I wonder if the Iraqi community had been assigned several thousand Shoshanas and Tikvas and it was imperative to use them all up.