Radio Interview with the last 'rabbi' of Baghdad

Not all interviews get aired, and this interview by Mishy Harman with the last 'rabbi' of Baghdad, Emad Levy, did not make the menu for Thanksgiving for 'Israel Story'. The station have now released it. 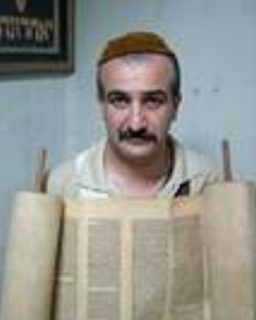 Emad Levy in the Meir Tweg synagogue in Baghdad

Emad Levy is the only Jew with an Arab name, and the only Levy with an Arab first name. He was elected leader of the 34-member Jewish community in 2003. His father taught Emad Hebrew from a record. Emad became the shochet, officiated at Jewish funerals, looked after the cemetery and old people's home, and read from the Torah on Shabbat.

When there were no longer any services, Emad was responsible for closing the only synagogue in Baghdad in case it was bombed. In 2010 Emad left for Israel, where he now lives with his wife and child.

"Emad Levy is the only Jew with an Arab name"- this isn't true. Many Jews from Arab lands had or have Arab names.

I think he meant the only Jew named Emad